Amazon to ramp up advertising business

After admitting in March that the threat of Amazon keeps him up at night, WPP CEO Martin Sorrell's biggest fear may have become a reality as Amazon reveals it's zoning in on advertising.

Right now, Amazon’s advertising business pales in comparison to the likes of Google and Facebook, looming quietly in the digital media space. Market research company eMarketer predicts Amazon will generate US$1 billion in ad revenue in the US in 2017. That compares to estimates of US$S34 billion in revenue for Google and US$15 billion for Facebook.

However, on its latest earnings call, Amazon was asked by an analyst whether advertising could become a more “meaningful part of the business”.

Amazon's chief financial officer Brian Olsavsky said it was much more a possibility than ever before, according to The Drum.

“Our scale and number of customers, number of clicks, number of eyeballs and new content – video content and other opportunities for advertising has really helped ...” Olsavsky said.

“It’s pretty early in the days with advertising but we’re very pleased with the team we have and the results.

“Our goal is to be helpful to consumers and enhance their shopping or their viewing experience with targeted recommendations, and we think a lot of the information we have and preferences of customers and recommendations help us do that for customers.” 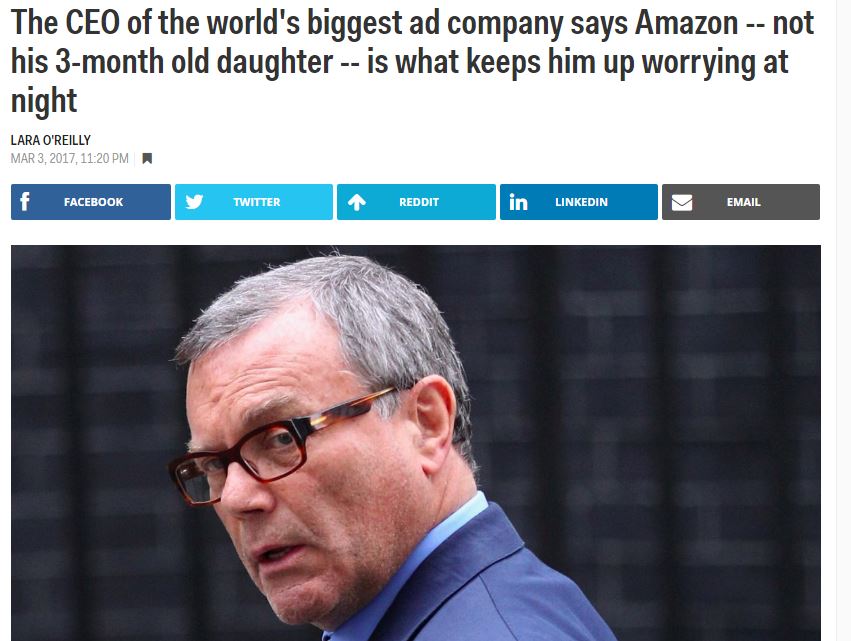 Reports spread that Amazon was keeping adman Sorrell up at night

Amazon’s comments came off the back an impressive Q1 that sent its shares to an all-time high in extended trading. Revenues of US$35.7 billion in the quarter topped Wall Street estimates of $35.3bn, and was up from the US$29.1 billion it posted in Q1 2016.

The digital giant recently confirmed it would launch in Australia, concerning local retailers.

A recent Morgan Stanley report found that Amazon’s arrival in Australia would not only severely impact retailer’s revenue, but it would have a flow-on effect to their advertising budgets.