Visual Jazz by nature if not by name 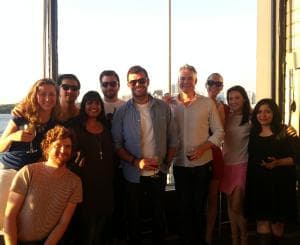 Digital agency Visual Jazz Isobar has dropped the VJ aspect of its name and will be known as Isobar Australia as part of a regional rebrand across 22 offices.

The rebrand will roll out across the region today with a brand identity developed by the Australian offices. It follows similar moves by Isobar offices in the UK and Europe.

The change sees the end of the Visual Jazz name, first established in 2001 as a two-man band in a share-house spare room, as the urban legend goes. Visual Jazz was then acquired by Mitchell Communication Group in 2007 for a reported $12.6 million. Following the buy-out of Mitchells by Aegis in 2010, VJ was merged with Aegis shop Isobar in 2012.

Isobar Australia managing director Konrad Spilva, who founded VJ along with David Stephenson and Brett White, told AdNews the rebrand has been in the works for six months among the regional country heads. It's designed to give the network a more cohesive identity.

“We've been part of the Isobar network for 18 months now and we've been able to tap into the great talent, learnings and global clients a network brings,” said Spilva. “It's not really a new era but it might be the 2.0 new and improved version of the band formerly known as Visual Jazz Isobar.

“It's a stronger vision, a stronger leadership and the passion to unite under one brand and truly become a great global agency. [The rebrand] makes a lot of sense when you're one brand, instead of different localised brands in different markets and trying to become a network when you're not really.”

The Australian team will remain the same with Spilva at the helm and supported by group general manager Victoria Gehrig and Sydney general manager Grant Henderson. David Stephenson serves as chief executive of Aegis' creative division.

Spilva stressed the culture of the local operations will be retained. “We'll continue to have our own set of values, which was crowd-sourced [among the team] 10 years ago,” added Spilva. “It is nice that [the network] looks to us and embrace what we've created as part of the culture. No one is saying these are the values you must follow and this is the identity you must follow. It makes sense for us to go in and have one unified brand but retain our local identity in this market.”

He does admit, however, the transition will pose it own challenges, with the VJ name so part of the local digital scene. “I think VJs has a pretty good reputation here, it's been in the market since the dawn of the digital agency age. I think it will take a little time for people to understand we've gone from VJI to Isobar but I think people understand the transition,” he said.

Spilva said it was a “bit of a nostalgic time” for himself and the other founders but the team is also emboldened by the change and what it brings.

“We're still the same agency, we've just changed our name. Hopefully VJs will have a great legacy but everyone is pretty pumped about what Isobar is going to bring.”