Harvey Nichols, the UK department store, swept the boards at Cannes this year taking home four Grand Prix awards, seven gold, four silver and seven bronze Lions for its “Sorry I spent it on myself” Christmas campaign, created by Adam&Eve/DDB, but what is it about the tongue in cheek, minimalist campaign that gets a reaction from consumers?

As part of our exclusive series of neuro-analyses of the winning ads at Cannes this year in partnership with Neuro Insight, we took a look at how viewers' brains respond to the ads.

The tongue-in-cheek Harvey Nichols viral ad inverts the aphorism ‘it is better to give than receive’. We see Christmas presents being opened to the disappointment of the receiver as the gifts are revealed to be Harvey Nichols branded trivia such as elastic bands, paper clips and toothpicks. In each such scene, it becomes clear that the person giving the ‘gift’ has decided to reward themselves with a substantial Harvey Nichols gift at the expense of the person expecting the gift. It is a very amusing ad that Ayn Rand, that high priestess of selfish greed would have happily endorsed, albeit with a straight face.

While highly creative and very amusing, how effective is this ad in terms of its likelihood to influence consumer behaviour? To examine this question, Neuro-Insight measured brain activity to see how females and males responded to the ad. The most important measure here is long-term memory encoding or what goes into conscious and unconscious memory storage.

The Neuro-Insight Memory encoding graph below shows how different parts of the ad are stored in long-term memory. The higher the graph, the more strongly that part of the ad is stored in memory and the more likely it will influence consumer behaviour.

Focusing on the three scenes that featured female apparel, we see that the segment featuring the shoes (first frame) and the hand bag (second frame) are well encoded in long-term memory while the shot featuring the dress is also well associated with high levels of Emotional Intensity and Engagement (not shown here). Importantly, the instances of verbal branding (indicated by the red stars) are also well encoded, in addition to the crucial tag line ‘Spend it on Myself’ and the voice over saying ‘A little something for them, a bigger something for you’. In summary, despite appealing to guilty pleasures, this ad is highly effective with women where the expensive Harvey Nichols gifts are strongly encoded to memory, which in turn, linked strongly to the Harvey Nichols brand.

Turning now to the male findings, a different picture emerges.

The first frame featuring the man’s jacket is well encoded and this is unsurprising as the item is male apparel. The segment featuring the attractive woman in the red dress (frame 3) is also well encoded. However, the segment featuring the young man receiving toothpicks is very poorly encoded and while not shown here, this segment is associated with a ‘withdraw’ or a negative emotion such as anxiety or sadness as well as very low Engagement and low Emotional Intensity. What is driving this is the male audience empathising with the man receiving ‘toothpicks’. This empathising response suggests that the men are not responding to the tongue-in-cheek humour but instead identify with the young man receiving the toothpicks.

The final frame featuring the text ‘Sorry I spent it on myself’ is very poorly encoded in long-term memory indicating that the males are not responding to this message. While not shown here, the final voice over ‘A little something for them, a bigger something for you’ is not only poorly encoded but is associated with low Engagement, a ‘withdraw’ response as well as high Emotional Intensity. The combination of high Emotional Intensity is most frequently seen in anxiety. This final voice over, rather than eliciting humour or another positive emotion elicits anxiety, possibly out of a sense of anticipatory guilt.

When we compare the overall or average value for the whole ad for the females and males, we find that males exhibit a more negative emotional response shown by the more negative ‘withdraw’ response in the males. In addition, males show significantly lower memory encoding than females. 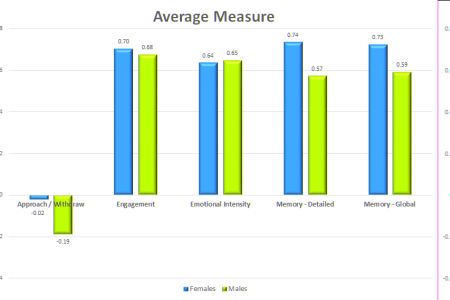 While it is clear that males do not respond to the ad narrative the way females do, and the ad would be judged ineffective for the male segment of the population, overall, this ad is highly effective with the target audience - females. Females respond positively to the tongue-in-cheek humour and the specific Harvey Nichols items features are very well encoded in long-term memory. Finally, the ‘Sorry, I spent in on myself’ tag line is very well encoded as is the key verbal message ‘A little something for them, a bigger something for you’.