AdNews has teamed up with Neuro Insight again this year to take a look at the science behind award winning campaigns from Cannes. They measure the brain responses of people as they view the ads and give a break down of the activity.

First up we take a look at why Volvo's Epic Split starring Jean-Claude Van Damme.

Advertising is full of clichés, and here comes another one! The Volvo Epic Split ad is stunning example of the old adage - “No Pain, No Gain”. The ad cleverly elicits an element of pain, which captivates (some) viewers during final sequences. In effect, the earlier pain has driven the effectiveness gain! We need to take a closer look at what is going on our viewers’ brains during this Epic Split. Comparing males & females’ responses adds an interesting twist to how the pain/gain equation pays off - for blokes.

Below is a Neuro-Insight Memory Encoding Timeseries analysis. The stronger memory is, the more effective the ad will be at that specific point in time. In other words, for an ad to have any effect, the right moments must be committed to memory. Memory is the principle, validated measure of advertising performance and success. Ideally, an effective TVC will hit 0.70 or higher (one a scale of 0 - 1.0) during specific branding & messaging points within the ad.

So interestingly, what we see in this video is that men are actually anticipating the pain. 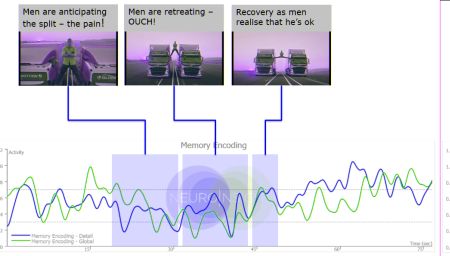 While these visuals (with Enya’s soundtrack) are gripping men’s attention, memory decreases as soon as the ‘Epic Split’ becomes apparent, continuing to fall quite dramatically through this whole sequence. This, however, is not detrimental, as it allows the ad’s storyline to be set-up and processed, as the ad transitions into the crucial message & branding moments.

We arrive at the “gain” side of the cliché at the end of the ad when the camera angle pans and the text is displayed. This has been done seamlessly. The sunset idyllically in the corner and the change in soundtrack sets the scene for ‘Volvo Dynamic Steering’ to be communicated very effectively.

Memory encoding is very high at this point, particularly Detailed memory (the red trace) - benchmarked amongst our top 4%. These high levels of memory confirm that the Volvo branding has been committed to male viewers’ long-term memory and that this is a highly effective - a beautifully sculpted piece of advertising. When an ad is evaluated in full context like this, often earlier lows are powerful set-ups for later highs – when it really counts! 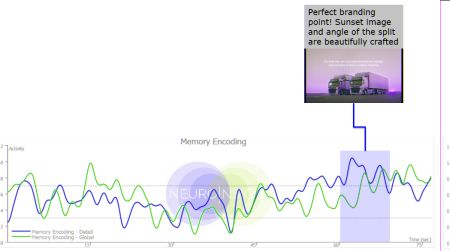 Women, who might not sympathise with Van Damme’s pain, reacted very differently, reinforcing just how effective this ad was with males.

Women are more intrigued and engaged in what is happening during the ‘split’ sequence – dramatically different to our male responses, which in turn, plays out very differently during the final message sequence as well. At the very point where males become highly engaged, women completely lose interest. The effectiveness of the final message and branding is much shorter and significantly lower with females. 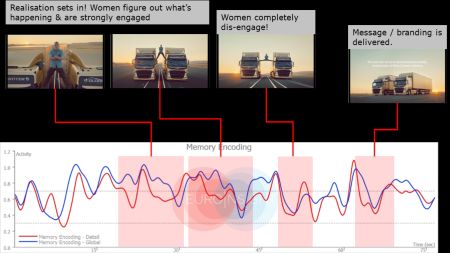 This is the first in a series of analyses of Cannes award winning ads from this year.