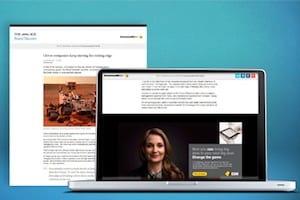 Fairfax's native advertising lead has claimed that advertorial is dead and native advertising is delivering engagement rates approaching those of its editorial. What is more, "native 2.0" takes pretty much everything but the brief and the creative away from ad agencies.

Felix Kruger, emerging solutions specialist at Fairfax Media, said today that the firm's Brand Discover platform had delivered engagement rates of over two minutes for native articles. That compares to an average of around 30 seconds for advertorials and three to four minutes for editorial. "It's safe to say that advertorials are dead, and we've known for quite some time as they don't do as well as they should," he said.

Whereas some have been quick to dismiss native advertising as just the emperor's new clothes, or advertorial by another name, Kruger said it was completely different. He defined native as "a content-based ad where the experience follows the natural form and function of the publisher's platform". Advertorial, he said, was often "too clunky" within an environment, with standard templates not optimised to the user experience.

Early movers in the US, such as The Atlantic, had run into trouble with native advertising efforts because they let the brand and its partners do most of the work. Advertisers should never use internal people to attempt native, he said, labelling that format as "native 1.0", where publishers just provide the distribution platform and the template.

What Fairfax and others are banking on to bring back the ad dollars is "native 2.0". "The focus is more on the publisher side – handle the strategy, provide the writer network, the audience expertise, custom article templates and different distribution options." That leaves the brand providing "just the brief and the creative".

The strategy, he said, was paying dividends for Australian advertisers. Citing a series of five articles for Zurich, written by Fairfax contributor and AAP journalist Muriel Reddy, Kruger said average engagement across the series was two minutes eight seconds. He attributed that lift to useful, insightful copy bylined by a journalist readers were familiar with and leaving the hard sell out of the content.

Kruger even claimed that "one SMH editor had called to ask why the articles around finding homes were not in the business segment". Relevance is the golden rule to holding reader's attention, he said. "Relevance is king. There is more content out there than anyone can consume in their entire lifetime."