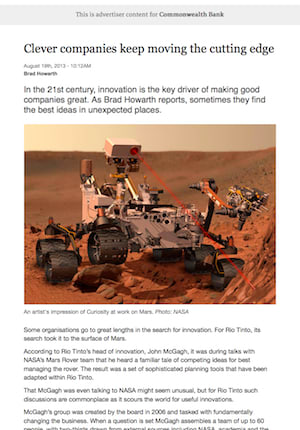 Fairfax Media has dismissed suggestions its new native advertising format is simply advertorial under a new name. Group sales director Ed Harrison says there is "a great deal of confusion", but that native is both publisher-led and specifically designed to live within the new website environment.

Fairfax launched the new format, called Brand Discover, across The Sydney Morning Herald and The Age websites this week with Commonwealth Bank as the launch partner. It's the first local news publisher to roll out 'native advertising'. "I think there is a great deal of confusion in this area," Harrison told AdNews.

"The best way I can describe this being native is really on two fronts: one is on the basis that it's proposed and led by our business based on what we know our audiences are interested in. We are writing to a theme that is aligned to the client's needs but not writing about their products, so that's a significant distinction.

"The other element which makes it native is it's designed and optimised specifically for the environment that it's appearing in. It's designed in a way that's consistent with how we communicate our editorial content and the advertising and brand within it is integrated into the article – it doesn't sit like a normal ad."

CommBank will use the format to spruik its institutional banking services in a series of five articles across Business Day, written by business journalist Brad Howarth. The first piece, 'Clever companies keep moving the cutting edge', features interviews with Rio Tinto, Myer, Mondelez Australia, as well as CommBank.

Harrison said the new format was "another arrow in the quiver", and that it was too early to say what sort of return could be expected. "I don't think we're at a point where we've really got scale in this area," he said. "This is just one component in a much larger plan, and Greg's already made it clear we're working on a broader strategy in the content space."

Media analyst Steve Allen, managing director of Fusion Strategy, says he predicts the format will be a success, "but only a modest success". "It certainly seems [like it will be successful], but it's something we haven't got any litmus test for in Australia," he said. "But Fairfax, like all publishers, are trying everything in the toolkit. Every little increment counts."

Allen said while there was "not a lot" of difference between what's now called native advertising and old-fashioned advertorials, there is "a subtle difference". "Native advertising is more a negotiation before the fact rather than an outright purchase. It's a media brand backing another brand [with its expertise], whereas advertorials are mostly written and created by the advertiser."

Brand Discover will initially offer two formats: Brand Discover series of standalone articles, and Brand Discover ebooks. In the US, The Washington Post and Forbes have launched similar products with some success. In Australia, youth publisher Sound Alliance has been leading the charge into native.

Sound Alliance content director Tim Duggan gave Fairfax's native advertising push the thumbs up. "It's really exciting that other publishers are seeing the benefit of native advertising. The interesting thing is each publisher interprets it in their own way – what Fairfax have got really right is they're going for high-quality content.

"It's super on-brief, well written by an experienced journo. The part that's different to ours is the format doesn't look exactly like other content on the site – with Junkee we try to make it appear just as any other piece of content. But the fact Fairfax have seen this as a growing area to concentrate on and have done a good job is a good sign.

"I expect every publisher is having lots of meetings right now about how they'll bring it to market – everyone wins with native advertising."