Two admen, a superannuation start-up and the end of advertising 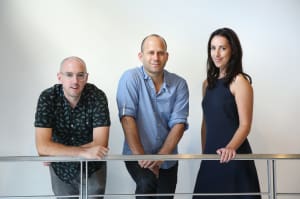 When Jon Holloway suddenly left his post as MD of R/GA Sydney last year many in the industry were wondering why and were waiting to see where the adman would resurface. A year later and he has recently revealed his next venture isn’t advertising, but superannuation.

Zuper Superannuation is an app aimed at 25-38 year olds. Its main objective is to help Australians care about super and democratise the ability to build wealth by giving them more control over their money.

Super is hardly a sexy category, but it has seen some disruption of late. Spaceship is a technology-focused superannuation fund, backed by Atlassian co-founder Mike Cannon-Brookes, that aims to attract millennials and Sillicon Valley-types with its tech-focused fund.

Holloway spent nearly ten years of his career in advertising but says it's a "burning platform" and his “heart land” is startups and fintech.

“I was involved in startups and global consultancies when I left university so it’s always been in my blood. I fell into advertising because that’s where the great creativity was happening in the world, but over the last eight years, it’s become very hard to make a real change to a brand and truly build something,” Holloway says.

Thomson, who has nearly 20 years’ experience in advertising, echoes Holloway’s views on the current state of advertising agencies.

“One of the things that got Holloway and I excited about Zuper was the idea of combining creative, innovation, strategy and technology. We’d combine those elements on a daily basis inside of adland but always on what felt like small problems, like selling soap or getting people to use more data on their phones,” he says.

“We realised we could apply the same lens to bigger issues and bigger problems to do something more meaningful and disrupt a space that has been too big, too slow and unable to adapt to the way the world works.”

Holloway has a history of being outspoken in the advertising industry. Last year on a panel at Vivid Sydney he declared the creative industry was “going to die”, due to the lack of digital talent in Australia, and penned an impassioned piece encouraging marketers to cut the cord with ad agencies.

Now he’s in the start-up world, he sees less relevance in ad agencies and encourages others in the industry to explore opportunities outside the ad industry.

“Advertising is becoming very different and what that means for the ad industry is the agency model and its structure is disintegrating,” he says.

“We don’t need ad agencies. All the startups myself and Thomson meet are not talking to ad agencies or media agencies. They are bringing those people in-house."

Holloway says “the whole industry is based on a burning platform” as agencies battle with shrinking budgets and flailing remuneration models. He credits his former agency R/GA with being ahead of the curb having a ventures business, consultancy arm and a startup accelerator.

He says ad agencies often create barriers between the client and customer that are damaging to a business.

“The structure of agencies doesn’t give you direct access to the client… I quickly realised it’s hard to get agencies and clients to be reactive because of how they are built, trained and structured. When it’s your business and your money you have to unlearn what you’ve been taught and become a growth machine,” he says.

Holloway believes a brand isn’t something a  business should outsource. It should be built into the product.

“Brand is not a campaign. It’s not colours on a screen. It’s the experience of the product and the virility of product. It should be so simple to use that people are never going to leave it,” he says.

“We have a very different approach to marketing and advertising. We don’t spend time thinking about the big idea, rather specific messages and the right time and medium.”

As part of promoting Zuper, the business has been running Facebook and Instagram ads. Holloway says the company is in the early days of its own advertising, running more than 1000 tests to see what is driving results.

Thomson says “nothing is off limits” to the business and it’s open to testing video, events, podcasts and more until it finds its sweet spot.

Grow Super recently teamed up with satirical new site Betoota Advocate to create branded content for Facebook, which was an unusual step for a super fund.

Thomson says branded content is certainly on the cards for Zuper, however, superannuation is highly regulated so how and what it communicates is restricted.

“It’s a fine dance to deliver the information to the criteria of the government and still be engaging and informative and speak to our demographic,” he says.

You can't change the world in adland

Holloway and Thomson may have moved outside of advertising, but they value the skills learned within the industry and still believe it can change the world - just "not in adland". The pair were keen to tell the story of their journey to inspire other ad execs to explore their passions beyond agencies.

“If you spend part of your career in adland you are going to learn so many skillsets, whether its understanding technology, how to tell a story, marketing a product – instinctually ad people have that in their DNA,” Thomson says.

“People shouldn’t take for granted what they know and they should apply it to their own idea,” Thomson says.