The whole creative industry 'is going to die' - R/GA MD 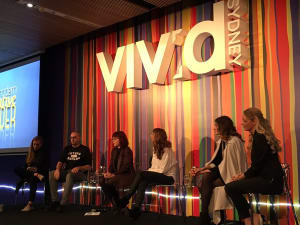 The panel of "pioneers" at the SheSays event at Vivid Sydney.

There is a lack of hybrid leaders in the Australian creative space, leaving agencies such as R/GA to outsource to other markets to find staff fit for the digital climate.

He says future leaders are “hybrid people” that can front the disruption currently facing the advertising industry.

“The whole creative industry is going to die in its current form, which is why we need engineers of new,” Holloway said. “Engineers of new is what creativity is really about.”

SheSays is a global women's networking group that runs free mentorship and events to women in the creative industry.

and events to women in the creative industry.

While Holloway says there is a talent gap in adland in agencies, Rogers says Facebook has the opposite problem, as people want to work for new-age media giants.

“We are lucky; we have hundreds of people that want to work for us. Our problem is, we have a “no dickhead” policy,” Rogers said.

The panel also spoke on the qualities it takes to become a leader in this climate, with Rogers saying people need to have a startup mentality and look past legacy, to climb the creative ladder.

SheSays organiser and Ensemble creative Yasmin Quemard called for diversity in the industry, addressing the epidemic of white, middle-aged, male CEOs in Australia.

“Men have a genuine need to see creative diversity in the industry. We need to build a more supportive industry for everyone,” Quermard said.

Earlier this year AdNews explored what was holding back women in creative and the gender issues facing the industry. Check out the findings here.

Interested in creative work in the industry? Check out AdNews Creative Choice, where industry execs put their eye to the test on the latest ads.