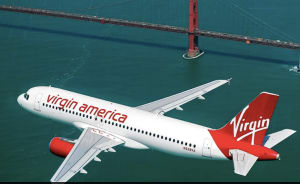 Twitter is considering building a new subscription-based product for some users - which could give the platform a new revenue stream. According to Adweek, Twitter confirmed it’s conducting a survey to see if users are interested in a “new, more enhanced version of TweetDeck”—Twitter’s dashboard for posting and monitoring the social media platform. Updates could include enhanced tools for managing and creating custom audience lists, improved TweetDeck access on mobile and more. The survey was first noticed when one user tweeted screenshots of the survey.

Virgin America brand will be retired after merging with Alaska Airlines

After just a decade in the air the Virgin America brand is set to be retired. Following Alaska Airlines US$4billion acquisition of Virgin America last year, it has now been revealed that the Virgin brand will cease to exist by 2019. From then, the carrier’s aircrafts will be branded as Alaska. Alaska Airlines VP of marketing Sangita Woerner said it had spent the last 10 months conducting: extensive research and listening carefully to what fliers on the West Coast want most” and that one name makes sense for consistency and efficiency.

Ogilvy has expanded its creative team with eight hires and promotions. Sharon Condy and Josh Murrell have been promoted to creative directors, reporting to ECD David Ponce de León. Condy and Murrell moved to Ogilvy from AJF in 2015 and have held creative roles at Grey, CHE and DDB Group Melbourne. Karsten Jurkschat and Alex Little have also been promoted to senior art director and senior copywriter. Ogilvy Melbourne also recently added four new creatives to its department, teams Carly Dallwitz and Sue Lorenz plus Zac Blakemore and Grga Calic, who will work through the line across the entire client portfolio.

TPG Capital to make a bid for Fairfax?

TPG Capital is edging towards making a bid for Fairfax Media as it considers buying the entire company as a move to get its hands on its real estate business Domain. According to the AFR, an approach from the private equity company could come as early as this week, following news Fairfax would spin off Domain into a separate entity to list on ASX, but remain majority-owned by Fairfax.

Another magazine bites the dust at Bauer

Bauer Media will be shutting down fashion magazine Shop Til' You Drop. The decision, which was formerly announced this morning, said the magazine will cease publication after August this year. This comes off the back of Bauer giving football magazine Rugby League Week the boot earlier this month. Shop Til' You Drop was made a fortnightly publication in 2013 and went completely digital the following year. Bauer also axed teen magazine Dolly after 46 years of production in October of 2016.