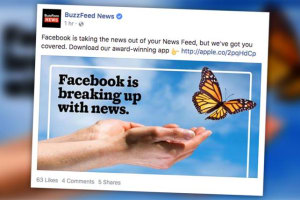 BuzzFeed is pushing people to its app using ads

Publishers are urging users to revert to their apps and owned assets, with BuzzFeed even upping its ad spend to do so, to fight back against Facebook following its News Feed update.

Last week, the social network announced it would restrict publishers’ ability to reach people in favour of content from friends and family.

The changes have been largely welcomed by media agency executives approached by AdNews, as well as Australian publishers, who believe the platform is finally taking the appropriate steps in tackling fake news.

However, publishers have also acknowledged it will impact reach and engagement and are now strategising ways to compensate in the audience decline.

BuzzFeed and Mamamia, who have both often relied on Facebook for audience access, have been placing ads to bring its readers back to their own assets.

In BuzzFeed’s case, it has been buying ads to bring readers into its own mobile app, ironically placed on Facebook. This plays into Facebook's plan of pushing publishers to spend more to reach people on its platform.

“Facebook is taking the news out of your News Feed, but we’ve got you covered,” BuzzFeed’s Facebook ad says.

A BuzzFeed spokesperson told AdAge the ad was placed to assure its readers that the Facebook changes won't impact its ability to connect and deliver content.

News Corp’s The Daily Telegraph is also betting on its app to offset its loss in Facebook audience, with its digital editor Peter Brown sharing a link on Twitter to subscribe to the publication’s app and get a month free.

“We have a News Feed too Facebook,” he writes.

Mamamia has been encouraging its readers to “return to the homepage” in several of its podcasts, adding that Facebook does not show the full breadth of its content.

Mamamia cofounder Mia Freedman says for several months now we have been diversifying our referrals away from Facebook.

"Like many publishers, we noticed a change late last year and that hastened our efforts to move our audience away from Facebook and back to the homepage and other platforms," she says.

"There's also a noticable move by women away from Facebook which we've seen over the past year or so which is why we've had a diversification strategy in place for some time."

The reactive strategies show publishers are kicking into action.

The behaviour of scrolling Facebook for news has become ingrained, making the consumer shift to publishers’ own individual apps difficult.

Several Facebook users have complained this morning that their News Feed has been left blank, with no posts from family and friends or publishers showing. Some users tweeted its been going on since Thursday, when the update was introduced.

AdNews has asked Facebook if the absence of content is a glitch or part of the new update. AdNews is awaiting response.

It's not just you...!
Facebook has "No more posts to show right now" for LOTS of people! pic.twitter.com/iCROIPj8cN

. @Facebook's algorithm shift really hitting hard. This is my 'most recent' news feed since publisher content was deprioritised, showing just how inactive my 350 FB friends are so far this week pic.twitter.com/MT71NRVZ11