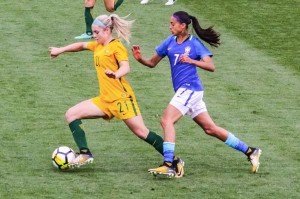 With the FIFA Women’s World Cup 2019 just days away from kicking off in Paris, it’s no surprise that we are seeing a wave of spots from sponsors and endemic brands begin to drop. And whilst many still take their lead from themes of equality or challenging gender roles in sport, what’s most exciting for me is to see the growth in Football ads.

And whilst I’m not suggesting we are anywhere near a tipping point in equality in sport (in many leagues there are still chasmic gap that needs addressing) it does feel like the advertising industry is starting to get it. And the sponsors of the game are too.

It would be easy to continue beating the drum of diversity, equality and empowerment - which are all very real and fair drums to beat – but true equality will only be achieved when we choose to remove gender as a differentiator from the conversation entirely.

And that’s what Nike have done with their latest belter released this week.

Ripped right from the front page of the Nike sports marketing play book, this is a brilliant Football ad.

It just happens to feature female players - and a few cameos from the Nike sponsored boys.

And the message is undeniably clear. Today’s Football hero’s are (literally in this case) dragging tomorrow’s stars up and into the world game every time they run on the pitch.

This spot would have been equally brilliant if Cook, Martens or Kirby had been replaced by Coutinho, Drogba or Ronaldo. And that’s the point. It’s using Football passion to sell athletic gear. And it doesn’t matter what cut, size or colour that gear is, the ad is there to sell it to whomever is motivated to buy.

And on any other day, it would have received plaudits - for all the right reasons - but I can’t help but feel like it’s already a dated approach. The message is clear and unapologetic, but if we as an industry can’t escape the ‘us versus them’ mentality, how can we ever expect fans to?

And closer to home, Hyundai (one of the longest running sponsors of Football in Australia) has released a series of films promoting their support of The Matilda’s. And rather than falling into the ‘Pink it and Shrink It’ trap, the carmaker has applied the exact same construct to these powerfully emotive films as they did just 18 months prior for the Socceroos with ‘Letters’.

And this decision is not because the Matildas don’t have a unique and compelling story to tell. It’s because that story ISN’T about their gender. It’s about the inspiration and effort that goers into being one of the world’s best footballers.

Matilda’s Captain Sam Kerr gets the longest screen time in the new Nike spot. And as a proud Aussie fan, that made me very happy. Not only does she richly deserve the attention, Nike were smart to feature her as she will shift plenty of sneakers.

After all, she is one of the world’s best female footballers.