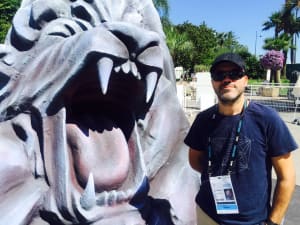 It has been a few years since I was at Cannes and the festival is more vibrant and inspiring than ever. Today, it’s not just the global event to celebrate the best in creativity with shiny Lions, it’s the global marketing huddle where delegates try and make sense of our increasingly tech-driven and diverse (some would say, complicated) industry.

While, it’s easy to just cynically write the whole thing off as a rosé fuelled party, that couldn’t be further from the truth. What the event does achieve is to drive conversation (admittedly often over a glass of rosé…) about the future of the business. Which to my mind is the same as it has always been – creative ways to get people to want to buy our brand.

Though, the most effective way to achieve this obviously depends on who is doing the spruiking, be it a creative agency, production company, media firm or one of the burgeoning ‘cloud-based crowd sourced data-centric programmatic real time analytics platform’ companies. Many of who claim to have solved this for advertisers (if not even the meaning of life) with their machine learning algorithms.

In one of the talks I attended in the Lions Innovation area, the speaker shared how his company had analysed global search data during the launch of the last Star Wars movie to discover that males like Luke Skywalker and females prefer Princess Leia. It’s safe to say that no-one in the auditorium fell off their chair on hearing this staggering insight. However, it did promote the debate around the use of big data and how it can best help in our task to sell stuff, more effectively, to people. I think it’s fair to say many big brands are still struggling to string together, and make sense of, the data they’ve already got, let alone open the flood gates to even more of it.

But, to state the obvious, each and every type of participant at the festival believes their service is the future for advertisers. And, as the owner of a creative agency, I of course believe that the value of big ideas outweighs big data. The lifeblood of our industry has always been about creating the new, not just reporting on what happened – even if a real time brand dashboard is now available on the cloud…

One of the great things about Cannes is that you bump into people who you haven’t seen for ages. I ran into into an old friend I hadn’t seen for 18 years, who is now a global creative director in London responsible for a bunch of FMCG brands. Over a few beers (you can only drink so much rosé…) he shared his thoughts on the debate. He joked about the paradox of clients who are getting hyper excited about real time data, yet still take 18 months to bring global campaigns to market. Clearly global clients need to get nimbler for data to be relevant and provide any real value.

As to not run the risk of coming across as some kind of data hater, I actually believe it takes the insights, creativity, technology and analytical skills from all the corners of our industry to make great work - and to make it work great. However, the watch-out is to not let this shiny new big data thing ‘cloud’ the fact that advertisers look to us to make lateral leaps and to create and invent what’s next, not merely report on the now. Unless data can be interpreted and leveraged to enable genuine human connections it is just cold lines of code wafting around on the cloud.

Another speaker illustrated this point nicely. He was from Pixar and shared how the studio engaged renowned psychologists to help them understand, map and animate realistic human expressions on their characters for the Toy Story movie. The psychologists collected gigs of data and created a database of expressions that led to a new era in animation – films that didn’t just show characters talking, but engaged viewers in what they were thinking and how they were feeling too. And as they say the rest is history, with Toy Story going on to become one of the most commercially successful and universally loved animated features.

Now that’s a great marriage of data and creativity.

By The Core Agency founder and creative partner, Jon Skinner