How brands should respond to Black Lives Matter 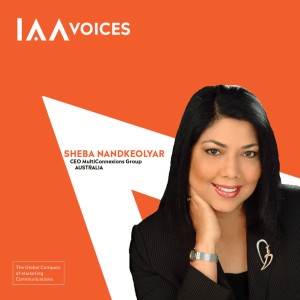 No brand, company, organisation, department, or person is immune to the ramifications of the unfolding Bla(c)k Lives Matter movement – in Australia or around the world. This is undeniably change for good. As a brown woman in the marketing and advertising industry for more than 30 years, I can see some positive changes, but I think we can and should do better.

Whether you prefer to quote poet Bob Dylan or scientist Charles Darwin, the message for our industry is loud and clear:

‘You better start swimming, or you'll sink like a stone - for the times they are a-changing’

After all, a new survey from Morning Consult found that consumers care about how CEOs react to social topics like BLM. Seven in 10 people surveyed said how CEOs react to such topics could permanently alter their decision to buy from a brand, and 70% said CEOs are responsible for combating racism and discrimination.

The data tells us that these are not pointless culture war debates.

This is not ‘cancel culture’ and we are not chill with this.

There is no ambiguity - It is time to change.

So how are we responding to these changing times? And how will history judge us?

Similarly, PepsiCo’s Quaker Oats promised to replace and retire its Aunt Jemima brand of breakfast products, which feature an image of an African American woman named after a character from minstrel shows.

Johnson & Johnson will discontinue the Neutrogena Fine Fairness line of skin-lightening products in Asia and the Middle East amid criticism that such products promote systemic racism and preference for whiteness.

Cream of Wheat announced a review of its brand imagery, acknowledging concerns about the image of a Black chef on its packaging – a racist trope.

Colgate announced it planned to pull and further review Chinese toothpaste brand Darlie. The brand had previously updated its name from ‘Darkie’ as well as the logo featuring a man in blackface, while the Chinese translation of the brand is currently ‘black person toothpaste’.

Positive changes are happening on the global stage however some brands still dig in and resist evolving. For example, sports team the Washington Redskins is so ingrained with controversy, they have earned their own Wikipedia page dedicated to documenting the uproar.

So, how are we doing in Australia?

I think we are too reactionary and not proactive enough. We are too quick to dismiss thoughtless advertising as mishaps.

In February, Harvey Norman was criticised after an image of a sign outside an Albury store with racist implications surfaced online. “No coronavirus in our mattresses as ours are Australian made!” the sign reads.

Comedian Josh Thomas sparked debate about the name of Australian cheese brand, Coon after taking to Twitter with an image of the product and a caption: “Hey Australia – are we still chill with this?”

WA-based Colonial Brewing Co faced calls to remove its products from shelves after being accused of creating nostalgia for a time in history when Indigenous people were killed en masse.

Last week’s news also featured a story about a Sydney café chain that had allegedly fired a black staff member because, ‘the locals are a bit racist’ and preferred a white barista.

And most recently, Kellogg’s was accused of racism with some questioning why Coco Pops is promoted with a monkey, while Rice Bubbles has three white-skinned characters on its box.

While it would be tempting to dismiss these examples one by one, in aggregate, they speak about a deeper problem. Australians are increasingly demanding a rejection of racism and expecting something better.

If there is a brand manager reading this and sweating profusely, there is still time to change. The time to act is now.

It is not all bad news! TV shows like MasterChef and The Voice that routinely feature incredibly diverse casts win big in the ratings game. As well as being the right thing to do, diversity can be profitable.

If there are people being hurt by racist tropes (and there are), we need to do better.

Worryingly, earlier this month China’s National Ministry of Culture and Tourism and Ministry of Education issued separate alerts to visitors to Australia warning of ‘a significant increase’ in racial abuse and violence.

There has been evidence of racism in Australia, but hardly on a scale warranting international travel warnings, right? Umm…

How about instead of being outraged or immediately denying Australia is racist, let us reflect and do better. It should not have to take huge lost revenue for us to do better.

There are some difficult and important questions being asked by our diverse communities today. It is time to have some uncomfortable conversations. What is your brand doing? What is your organisation doing? What are you doing?

The International Advertising Association Global is hosting a free panel on Thursday at 7pm to help brands improve diversity and inclusivity. Register to hear from the panel of global experts here.