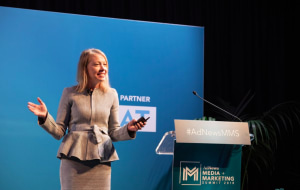 That’s because brands are grappling with how to represent themselves in an increasingly fragmented and diverse market.

At the same time, a number of progressive companies have recognised how important it is to attract and retain a diverse workforce and create inclusive work environments where people feel they can speak up, be creative, and do great work.

Diversity of thinking and diversity of background contributes to creativity, the DNA of media and marketing firms.

The pay-off when organisations go out of their way to meet the needs of diverse customers is high. Customers return for repeat business. Some become advocates for the brand in their own communities, according to recent research on customer diversity by Deloitte and the Australian Human Rights Commission (based on an independent survey of 1,200 Australians).

That research found we can do a lot more: less than 50% of those surveyed agreed that organisations try to understand the unique experiences and needs of diverse customers, including minority groups.

When it comes to diversity, we often hear about the media campaigns that go awry. There’s a long history of ads that objectify women or miss the mark on representing Australia’s cultural diversity.

Yet there are some smart campaigns that challenge gender stereotypes and embrace inclusion. SBS currently features a digital campaign, ‘The real you matters’, which explores how some Australians hide an essential part of who they are out of fear of being excluded or judged.

Retailer Woolworths has had a television campaign for some time now with Dad carrying the domestic load, making lunches and grocery shopping.

These are signs of progress in reflecting, and representing, diversity and inclusion.

But advertisers and media specialists are human and prone to making decisions influenced by unconscious biases, as we all are.

Psychologists and behavioural economists have shown one of the key barriers to diversity progress in organisations is unconscious bias.

Even though we like to think we always apply logic and reason in our decision-making, implicit or unconscious attitudes or stereotypes (based on our life experiences and backgrounds) affect our understanding, actions, and decisions.

The reality is we all have these biases so ingrained we hardly notice them - that’s why they’re called unconscious or implicit.

A good example of this comes from research showing that simply holding a hot drink can affect our perception of people. An experiment at the University of Colorado Boulder, published in the journal Science, found that “participants who briefly held a cup of hot (versus iced) coffee judged a target person as having a ‘warmer’ personality (generous, caring)”.

The marketing and advertising industries use unconscious bias to great effect.

For example, anchoring is a cognitive bias when we rely too heavily on an initial piece of information (the anchor). You might know this as the technique behind sales tags showing the higher recommended price next to the sale price.

Marketers deploy affinity bias when showing all the other people in our network who like a certain product/experience. Indeed, the whole of social media is built around confirmation bias – how we search for, or recall, information that confirms our beliefs.

But here’s the rub. While the industry deploys these biases to help influence purchasing decisions, these same types of unconscious biases hold organisations back when trying to reach diverse consumers and progress diversity in our own firms.

Take affinity bias and confirmation bias, for example. Working with people from different backgrounds can be hard because we naturally gravitate to people who are like us, and we like to have our views confirmed. This can lead us to overlook candidates from diverse backgrounds, or discredit alternative views, or miss opportunities to reach diverse customers.

Unconscious gender biases, for example, are particularly entrenched and can easily influence decisions if we’re not alert to them.

We expect women to show warmth, and men to show assertiveness and competence. Our notions of leadership are associated with assertiveness and competence – in other words, masculine stereotypes. In workplaces, someone who behaves in a way that’s inconsistent with these stereotypes is less likely to be hired, says Binna and Jo Kandola in The Invention of Difference: the story of gender bias at work.

It’s easy to fall into the trap of gender stereotyping in our workplace interactions and in media marketing messages. You don’t need to search far to find ‘insights’ from one global media player on the ‘emotional economy’. Take this quote for example: ‘Female traits such as emotional intelligence, empathy, vulnerability and intuition will be the future drivers of business.’

The only thing is they’re not female traits, they’re human traits.

While these are meant in a positive or affirming light, they’re still cognitive shortcuts that keep gender stereotypes alive and inhibit diversity. Countless studies examining sex differences about people's ways of thinking and behaving find no differences between men and women, as eloquently summarised in an article by Catherine H.Tinsley and Robin J.Ely in Harvard Business Review last month.

What’s important – for internal organisation cultures and external marketing campaigns – is to get the tone and language right, avoid stereotypes, and represent the diversity of Australia’s community.

If you're part of the media and marketing industry, there’s two tangible things you can do now to make a difference:

Just as marketers and agencies have effectively deployed unconscious bias to influence buyer decisions, now’s the time to recognise and challenge unconscious biases and stereotypes that get in the way of diversity and inclusion progress in organisations.

The likely upshot is more creativity and greater customer reach and, in this industry, who wouldn’t want that?