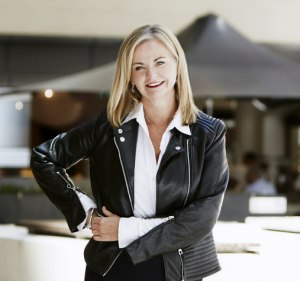 I’ve always been curious about what motivates women to act – whether it be to change a behaviour that no longer works for them or purchasing a product they’ve never tried before. The unfair tax on tampons is one such issue that many thousands of women and organisations across the country have been protesting against for more than 18 years.

As a publisher, and one whose primary audience is women, we looked at what we could do to bring the issue back into the spotlight and ignite the power of heartland Australia. Readers can see past a self-serving campaign based on commercial interests; and any brands’ discussion of political or social issues needs to be authentic and reflect the interests of its community – not the commercial interests of the brand. If not, they are doomed to fail.

Our activist agenda began early this year when Bauer committed to drive a more fair and equal future for all women. As a publisher we’re in a privilege position. We have the assets, trusted brands, audiences, and distribution channels that most community organisation don’t have access to. After talking to our readers we identified the unfair tampon tax as one issue that they wanted addressed and one which aligned with our mission to drive equality for women. 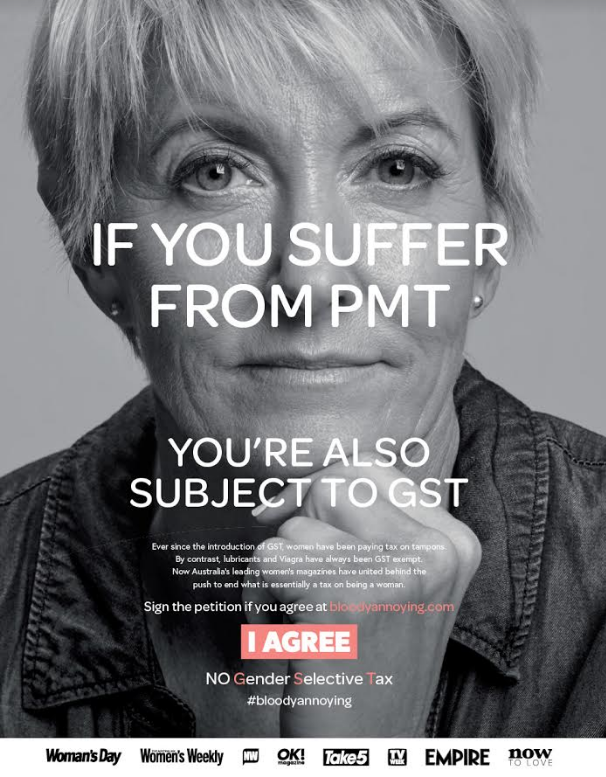 First stop, our editors. We asked whether the removal of the #bloodyannoying tampon tax would be authentic and align with what matters to our readers – both women and men. All thirty-six titles were on board. Next stop we had to get the backing of the senior leadership team to invest in a campaign that was not at all about selling magazines or advertising solutions. They were unanimously supportive.

To bring the campaign to life we turned to our research team that advised us the creative needed to make both women and men feel strongly enough about the cause that they would act and share. We promoted positive unity between genders and appealed to every Australian’s inherent belief in a ‘fair go’. We briefed our creatives to never make a woman dress up as a tampon and dance outside Parliament House, but to instead ideate a smart, cheeky campaign to spark the greatest appeal. The ‘No Gender Selective Tax’ campaign was born and ran across 36 of our brands, in print, on digital and social. 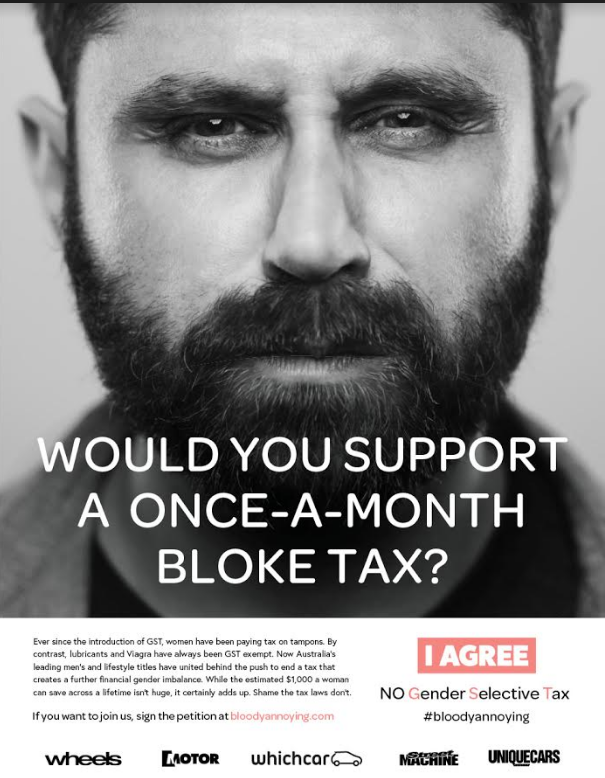 As the assets started to appear, the petition began to collect names. However, the real action happened when we sent over 500 personalised letters to key government decision makers, urging them to ditch the tax. We knew we got their attention when, two days later, the responses started to roll in. Replies arrived from Scott Morrison, Kelly O’Dwyer, Catherine King, Bill Shorten, and many more to inform us that the issue would be discussed at the Council of Federal Finance Relations on October 3.

After 18 years of campaigning State and Territory ministers agreed to abolish the 10% GST on feminine hygiene products. Credit must go to all the thousands of women who, for almost two decades, have campaigned for change. We’re very proud that our work to highlight and refocus the issue over the past three months also helped to drive the debate and lead to permeant change.

It’s a great example of what can happen when brands and people unite for a common cause. Removal of GST on tampons is a great win for women and I urge more publishers and brands to use their privileged positions to take a stand and help drive positive change.