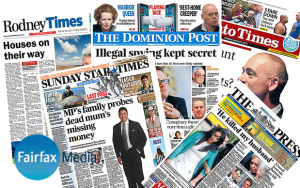 NZME has agreed to buy rival Fairfax NZ for $55m if the merger goes forward, with Fairfax Media securing a 41% share in the merged entity.

In a joint statement to the NZX and ASX exchanges, New Zealand's two major print and digital media companies announced they had signed a merger implementation agreement.

The merger itself is currently being considered by the Commerce Commission, with a decision on whether to allow the merger due on March 15 next year.

The deal has been in the works for a few months now, with APN News demerging NZME in June to pursue the tie-up with Fairax.

Under the terms announced, NZME would buy 100% of Fairfax New Zealand. Fairfax will also nominate two directors to join the board once the merge is complete.

"The merger will present opportunities for NZME to significantly enhance our integrated offerings to both our audience and our advertising clients."

Fairfax Media NZ managing director Simon Tong said a combined business would allow it "to continue to invest in quality New Zealand journalism – ensuring a strong future for storytelling by Kiwis, about us, and for us".

Critics have said the merger would be bad for journalistic standards, but the company has argued it will offer “greater depth” of news, sport and entertainment and more opportunities to advertisers.

NewsMediaWorks CEO Mark Hollands tells AdNews the move is "historic" for the New Zealand publishing market, and he expects the merger will be approved by the Commerce Commission.

"It's clear with the success of Google and Facebook that advertisers and agencies respond to a simple sale. With the two companies coming together, it is much easier easier for clients to buy through the publishers," he says.

Hollands believes media mergers in the New Zealand market are "common sense", as the market is considerably smaller than Australia's.

"In a market of only four million people, media companys in New Zealand have to come together to fight in a globalised world," he says. "You have to make media easy as a category, not a company."