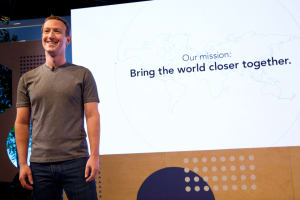 Facebook founder Mark Zuckerberg has outlined a new vision for the platform that puts its 'groups' feature at the heart of its mission to “build community”.

He thanked group admins and called them the “real leaders” of the social media platform at Facebook's first Communities Summit in Chicago.

The new 'mission statement' promises to not only “connect the world” but also “work to bring the world closer together”, using groups as a way to “progress” in our “divided” society.

The full mission statement is to “give people the power to build community and bring the world closer together”.

“This reflects that we will not accomplish this mission ourselves, but by empowering people around the world to build communities and bring people together,” he says.

Zuckerberg's address, reiterated in a post on his page, touts the importance of staying connected to “end poverty, cure diseases, stop climate change, spread freedom and tolerance and stop violence”.

During his Chicago address, Zuckerberg also announced five ways group admins will be better equipped to “help them grow and manage their groups” for better membership vetting and stronger real-time metrics.

His speech at the summit echoed the open letter he published in February of this year which detailed the future of Facebook and the importance of “developing the social infrastructure for communities”.

In the letter, Zuckerberg revealed how he plans to change the social media network in order to tackle fake news, improve how people communicate and to generally make the world a better place.