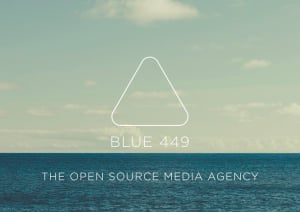 ZenithOptimedia's new global media network, Blue 449, will open in Australian in “the medium-term”.

The agency announced that Blue 449 would be spun out of Walker Media in London, designed to be a more nimble challenger brand within the Publicis stable.

It is being pitched as an 'open source' agency, “welcoming input from beyond our own walls, creating a true network of talent, weaving together data and ideas and breaking down unhelpful silos.”

It will have 17 city hubs by the end of the year, and while it won't be in Australia in the short-term, Zenith's local CEO Ian Perrin told AdNews plans were underway to launch an offering in Australia “in the medium-term”.

He said that Blue 449 has been set up as a challenger brand, with a smaller budget backed up by the weight of ZenithOptimedia worldwide.

“It's obviously exciting to have that second brand coming through from a conflict point of view and from an alternative revenue point of view,” Perrin said.

“It's been designed to be a real challenger brand for the network, to be agile and nimble while having the security of the broader network”

While it won't have a presence in Australia in the short-term, the global agency says it will be able to offer solutions in each market by leveraging the ZenithOptimedia network.