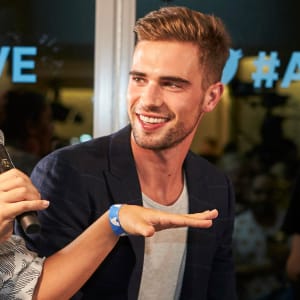 Our Young Guns profile takes a weekly look at some of the buzzing young talent across the advertising, ad tech, marketing and media sector in Australia. It aims to shed light on the varying roles, people and companies across the buzzing industry.

For our last Young Gun, we spoke to AdRoll head of account management Josh Hall.

I oversaw Lifestyle and Creator Partnerships at Twitter, based at its Australian HQ.

I had been working with the guys at SCA for about three years on a series of partnerships with Twitter. Mid 2016 they approached me and offered me an amazing opportunity to lead a great team, be really creative and innovative and work across so many amazing brands in SCA (Hit Network, Triple M Network, VEVO and Podcast One).

I have so much creative control in my job and have an amazing team behind me to help me deliver strong strategies across the network. I get to run my own race here and that’s the way I love to operate.

I’m in the product team at SCA, my role as director of social media is to lead the social media strategy across the
business and inspire the content teams. Along with the strategy I think lots about the innovation pipeline, working closely with with Facebook, Twitter and YouTube to experiment with new features, tools and content formats.

Another key area of my role is to lead the commercialisation of social, working closely with sales, creative and content teams to craft perfect solutions for our clients.

It’s all about the energy, creatively and passion. If you’re bored in this industry then you’re in the wrong industry – I’ve always said that.

I love that I’m constantly challenged by such creative minds across the entire media industry.

It’s only been a few months, but I’m amazed at all the different areas at SCA. It’s an incredibly huge business. I’m still learning what everyone does. Coming from the start up environment at Twitter, I was one of their first employee’s in Australia, we eventually made it up to an office of about 45 people. SCA has over 2000 employees, across so many offices in metro and regional Australia, it’s huge.

I’d probably try my hand in marketing or partnerships. I work really closely with these areas of the business and love the way they operate.

Several years ago the term ‘social media’ used to be just a side project that companies didn’t really understand. 2017 is here and it’s fast becoming a key department and factor across so many businesses globally. If you’re not on social, your brand pretty much does not exist.

I also find it fascinating that 10 years ago my job did not even exist. It kind of excites me for what’s ahead for the next people coming up the ranks.

There are a handful of media companies that haven’t taken on the digital / social boom yet. These guys (won’t name them) are still doing social and digital so poorly. It’s sad to see because they are just being left behind and it will be really hard to play catch up.

Chris Johnson (head of digital product at Southern Cross Austereo). Chris has been at SCA for several years now; he has a wealth of experience in digital and product. He’s formally from the BBC Radio in the UK, a radio network so many media companies look to everyday.

I’d say my first boss at Twitter – Danny Keens. Danny has so much experience, he’s worked at 60 Minutes, started the Media Partnerships team at Twitter in Australia, went to the US to lead the entire Sports team at Twitter and is now killing it in California working as the vice president of NextVR.

He bought me over from the Nine Network and helped me climb the ladders and got me to shine at Twitter. Danny is an incredible mentor and friend to me, he helped me make my decision to leave an amazing role at Twitter and take this step up at SCA.

I actually set some goals only a few months ago when I was transitioning from Twitter to SCA. I think it’s always good have goals to look forward.

I’d say in three years I’d like to have achieved some pretty cool things at SCA. My aim is to leave my stamp on some cool innovative stuff. Watch this space...

But, the ultimate goal is to build out a business and/or go spend a bit of time in London.

There are still so many people across the media industry that see no value in social/digital. It’s a challenge for anyone in digital or social role ... people say this to me every week.

My message to these people: Don’t be scared of change, because it’s here to stay.

Multiple areas. I learn lots from listening to podcasts. I also love the culture out of Silicon Valley – there are many people across the tech world I look to. Katie Jacobs Stanton, former VP of Global Media at Twitter and such an amazing business woman (Katie and I worked together at Twitter) and Sheryl Sandberg from Facebook of course.

I think it’s important to have mentors through your journey of life, across different areas (career and personal).

I have a fascination with the property market. When I have downtime I have a whole page on my phone with real-estate apps. Since buying my first investment property I can’t stop searching for the next one.

I love Apple’s series of adverts in late 2016 promoting ‘Apple Music’ – especially the one with James Corden. Apple has really struggled with the Spotify but I think these did justice for the brand.

‘A comfort zone is a beautiful place, but nothing ever grows here’

I got into industry because:

I didn’t want to just stare at a computer all day long, so I pushed and pushed and I got in working for Kyle and Jackie O in 2009, moved over to the Nine Network and worked my way up the ranks there and then got the most incredible opportunity to be one of Twitter Australia’s first employee’s.

I’ve done content, partnerships/marketing and now product at SCA. I’ve been challenged in every job I’ve had, that’s extremely important to me.

A pilot – I love planes or a physiotherapist, the human body fascinates me.