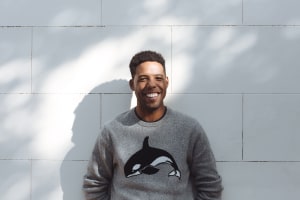 Time in current role/time at the company:
I’ve been in my current role for one year, but I’ve been working at Inskin for nearly two years.

How long have you been in the industry?
Just ticked over five years.

How did you get here? Was this always the plan?
My career journey so far has been unique, but media and advertising was always the plan. An aptitude test I took in high school suggested I should work in advertising, so I decided on the spot that I wanted to be the advertising director of GQ Magazine. This guided my decision to do a double degree in Journalism and Communication Studies at university.

While I was there, I got involved in broadcast, running and hosting my own radio show. After graduating I was a sports presenter, but then decided to move to Australia rather than pursue a broadcast opportunity in Chicago.

As a backpacker in Sydney I was working at a wine bar in Potts Point but knew I wanted to get a more permanent role in media. I met a few senior people from IPG Mediabrands who basically hired me on the spot when I suggested a bottle of Cotes du Rhone, and the rest is history.

Who is your right hand person/who guides you day to day?
My right hand person is Lizzie Grant, who manages all of Inskin’s operations in Australia. She’s an absolute weapon and our company literally couldn’t function without her.

My day to day guide is Georgia Woodburne, Inskin’s general manager, who’s always there when I need her.
I count myself lucky that I get to work side by side with two talented and strong women on a daily basis.

What’s the best thing about the industry you work in?
The people, hands down. There’s so many amazing, talented people in this industry who I’ve been able to meet and do great work with. The fact that these working partnerships often turn into genuine friendships just adds to the industry’s appeal.

The industry also offers plenty of opportunity to try different things and diversify one’s skill set, which I think is really important.

And the biggest challenge?
I would say the biggest challenge is combating misconceptions around the importance of creative in display advertising. It’s easy to think that just because your ad is on a screen, the viewer is paying attention to it. But with so many distractions online now – not to mention that so many of us are second screening - capturing consumer attention is much more challenging than that. It’s about using the right formats in the right way, to create as much of an impact as possible.

Whose job have you set your sights on in the future?
Whoever is the advertising director is at GQ Magazine.
...Or Wendy Williams.

Where do you turn for inspiration?
Reddit. It’s the source of nearly all the useless information I fill my brain with.

Or I’ll talk to Tom Hosking, Matt Ticehurst or Tim Collier who were all former bosses of mine and some of the smartest blokes I know.

My favourite advert is:
One that stands out for me is the Budweiser “Wassup” Super Bowl ad from 2000. It’s the first ad that I distinctly remember having a cultural impact where people were going around saying “Wasssssup” to each other.

While this is on the sillier end of the spectrum, part of why I love good advertising is because of its ability to start conversations around cultural and societal issues.

Tell us one thing people at work don’t know about you?
We’re an extremely close team at Inskin, so they pretty much know all there is to know about me.... That said, I don’t think they know that my dad’s nickname for me is ‘Domer’ cause I have a big ol’ head (read: dome) that slopes up. It’d be much more noticeable if I weren’t rocking a flat-top fade at the moment.

In five years' time I'll be:
Continuing to do great work and making people smile.