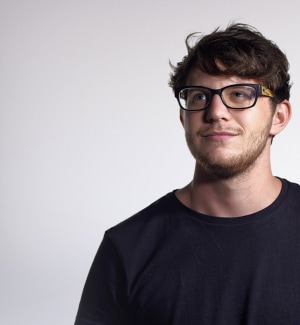 This week we speak to Clemenger Sydney copywriter Emil Cholich.

I was working at TBWA. We got the job at Clemenger because Shaun and I were working at different agencies and we both wanted to do more creative work. We’d worked really well together in the past so we did Young Glory, pulled a new book together and created a one-off EDM for Paul Nagy, who was ECD at Clemenger at the time. He hired us that week.

My real expectations were to work my butt off. My main cliché one was that the industry is full of slimy people who will do anything to get ahead.

I was right about the working a bunch bit. I’ve probably been really lucky but I’ve found the second to be untrue: It is possible to steer clear of dickheads (mostly).

The copy paste response is we solve clients’ briefs with creative solutions. My role involves getting those briefs and trying to come up with an original or novel solution.

You get the comfort of an office job without the discomfort of a suit and tie, all while you get to hopefully make something fun or interesting.

At uni they framed having a good idea to be the hardest bit of the job. In reality having a good idea is just the beginning, and you’re like Clive Owen in Children of Men – you have to protect the hell out of it for as long as you can and at end the only closure is you send it out into the fog with a stranger on a boat. Except we aren’t saving the world.

Planning – when you do it right you’re pretty much doing half the creatives’ job anyway.

We get new platforms all the time. They may seem restrictive but if you take a look at how something like Facebook serves work, it’s now cheaper to run ads that are creative. So there’s finally a more direct financial reason to be more creative than the advertiser next to you.

That someone who likes suits and ties buys up the whole industry and I have to wear that every day. I have a kinda chubby neck for my torso so it’s really hard to find the shirts and ties I would need to wear. I’d probably have to get stuff tailored or start a shirt company for disproportionately fat-necked people and at that point I guess I wouldn’t need the job because I’d have all that sweet shirt money.

Our CCO, Ben Coulson. I’ve just put down my first deposit on a tanning bed and made a bulk order of white, linen button-ups.

I’ll be working in the propaganda factories of the New World Order while plotting their downfall from the inside. Or probably working at an agency – I’m pretty happy doing it.

Advertising is an elephant in everyone’s rooms. It honks while you’re trying to watch your favourite shows or while you’re trying to scroll through stuff. Marketers have a cult-like obsession with their own products and agencies tend to fuel that rather than remind them; most people would rather find out if Sophie Monk and Stu are still together.

If it’s sticky, smell it first.

I wanted to do design and Curtin Uni forced you to do it as part of an advertising course. I fell out of love with designing and into loving concepting, idea-generating and writing.

One of those lawyers with a fake degree.