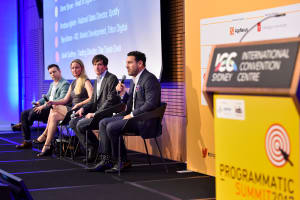 When it comes to nailing advertising through audio, as a brand, “you don’t have to scream at the audience to get cut through", says national sales director at Spotify Andrea Ingham

Speaking at Ashton Media’s Programmatic Summit on a ‘Programmatic Audio – The Next Big Thing’ panel, which attracted more than 400 people to the Sydney ICC, Ingham says the days when a brand’s only option was to shout for attention via audio should be long gone.

“Best practice is really understanding the platform – about 85% of consumption is through headphones – you don’t have to scream at the audience,” Ingham says.

Ingham says it’s about mapping context around moments, mood and behaviours, with the help of data, and what works at one time of day won’t necessarily resonate and appeal to a listener at another time of day.

“Particularly given the majority of our audience sits under 40 - they expect a personalised conversation these days. They don’t just want a blanket message that seems to be for everyone,” she says.

“How you communicate with someone while they are chilling, versus while they are partying, versus when they are working out is very, very different, even though it’s the same person. So wrapping context around the message and producing more bespoke creative for audio streaming, particularly with scale, is really important.”

Ingham boasted the luxury of having a strong database and also how bespoke creative is the way forward. While they only do it from time to time, she referenced advertiser Holden, which dabbled in bespoke creative and saw its ROI triple.

She also mentioned the benefits of messaging that incorporates the 3D audio element in headphones and the richer "cinema surround sound and cut through” this can deliver.

When it comes to the range of different audio channels, from radio and streaming to podcast and beyond, panellist and head of digital sales and operations at Southern Cross Austereo, Steve Brown, said the cost of entry is lower from a creative point of view when it comes to radio.

He said looking at brands pushing experimentation there were “no stand out” brands as such and suggested there was “still a hangover” around the connection between the creative.

Co-chair of the IAB Audio Council, Gai Le Roy, chaired the panel, which also featured trading director at The Trade Desk, David Godfrey, and MD of market development at Triton Digital, Ben Masse. Both weighed in on the hot topic of programmatic audio.

With a market keen to take advantage of the power of programmatic, Godfrey said audio is firmly on the agenda - particularly with players in the market like Appnexus and The Trade Desk buying inventory from the likes of Spotify, SoundCloud, SCA and Nova.

Masse said that often the creative agencies are not involved at the right moments in the whole audio cycle.

“It’s no longer simply a buyer and seller shaking hands and them having a spot running on a weekly basis – it could be much more sophisticated but that means at the planning stage and strategy session they really think about how they will be executing the campaign. This is where the bespoke or automated delivery of certain creative comes in,” Masse said.

Uniting for the greater good

Masse added that what makes countries like the Netherlands and Columbia so far ahead in this space is that agencies, trade desks and traditional buyers are well integrated and all have the same mindset.

“There’s no fight between traditional and digital and the publishers also believe in it so everyone is pushing hard to make it happen – and no one is afraid of testing," Masse explained.

“One thing that will prevent the growth of any market is where everyone is just waiting for everyone else try it. That would be a failure, you have to dive into it.”

Ingham said in order for the audio buying space to advance there’s a huge amount of refinement and education that needs to be done to bridge the knowledge gap – especially when it comes to buying audio as there’s still a lot of complexity.

She said a lot of the digital buyers may not understand audio just as some of the radio buyers may not fully understand the whole realm of audio. Ingham also agreed there are many misconceptions around the audio space, particularly as there are so many surveys, and that it would be great if one third party measurement could universally be agreed on.

Which audio method is best?

In a question posed by audience member and RadiumOne MD Adam Furness, a former SCA sales director himself, he asked what marketers should be looking to invest in when it comes to broadcast radio versus streaming versus podcasting.

Ingham was first to respond by saying: “We’ve done a lot of research and it’s not about one or the other as they both very much complement each other,” she said.

“But the big differences are that with radio you kind of have to scream out to be heard amongst those 15 ads; or it's in the background somewhere or often when someone is driving a car. Whereas with digital streaming it’s a very intimate one-to-one conversation, which you can then layer over all the targeting capabilities.”

Ingham was keen to stress that both streaming and digital worked well together but pleaded “just please don’t grab your radio ad and throw it on streaming”.

In the face of splintering audio audiences, despite Spotify saying it can complement radio buys, last year Commercial Radio Australia argued the Swedish streaming firm was merely “riding on the coattails of radio”.

Brown said it’s about what the brand’s needs are - from strategy and KPIs to what it wants to do reach and storytelling-wise – and of course the budget.

“We obviously play in all four quadrants of the audio space – broadcast, podcast, streaming and DAB+ and they are all very different environments depending on what the brand wants,” Brown said.

Radio is one of the main media channels that has experienced strong growth over the last year, with many streaming players looking to close in on the lucrative market.

In addition to the streaming boom, traditional radio networks such as Nova and SCA have invested in podcasts by inking deals with global podcast platforms.