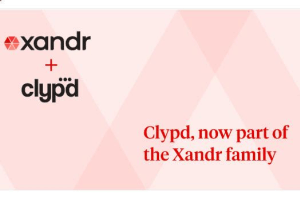 Clypd, which was founded in 2012, is a sell-side programmatic platform which uses data to help advertisers target television viewers more precisely.

The company has partnerships in place with Discovery and CBS.

The acquisition will leverage Clypd's data solutions for advertisers and add linear TV ad inventory from Clypd's clients to the Xandr community.

The acquisition comes just over a year after AT&T merged its advertising businesses with AppNexus to form Xandr.