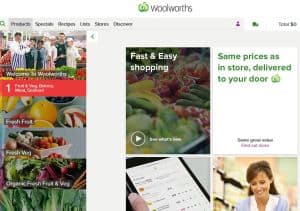 Woolworths is preparing to overhaul its e-commerce platform as it forges ahead with a three-year plan to rescue its ailing fortunes.

The retailer’s director of customer experience, Jess Gill, told AdNews that the new platform is being trialled in Tasmania and it is also thought to be live elsewhere in Australia, with the exception of NSW and Victoria. Woolworths’ multi option general manager, Kate Langford, who joined in 2013, is heading up the e-commerce development plans.

Gill says the retailer is purposefully holding back on a speedy nationwide launch in order to guarantee that “the back end is really tied up”.

The retailer has also adjusted online pricing, so it mirrors the cost of in-store items, and a new set of Click and Collect locations will open.

The new site is more simple and easy to use than the retailer’s past effort. It boasts new search functionality; visual searching capability where products are listed as they are stocked in the physical stores and promises it can deliver goods to 96% of Australia, with the ability to book a specific delivery window and the option to track an order.

Gill said: “We know three things our customers look for: product information, price information and comparison and inspiration – it’s the same online as offline, and being able to shop with those in mind is very important.”

Last week Woolworths unveiled a weak set of results for its fiscal third quarter. Comparable store sales came in at a flat 0.2%, forcing the company to reiterate that its “new leadership teams have clear plans in place to restore sales momentum and extend its market-leading position”. Woolworths accompanied its results with a three-year ‘Lean Retail Model’ strategy document that outlines its plan to increase investment in “multi-channel customer experiences”.

Alongside it announced it will implement savings of more than $500 million during the next financial year, with $125 million already invested in lowering prices since January.

The firm has a 50% stake in data and analytics firm Quantium and is using that relationship to inform the direction and capabilities of the new platform, particularly with regards to how the company, both bricks and mortar and online, responds to customer behaviours.

The website overhaul comes as the supermarket's CMO, Tony Phillips, exited suddenly. Phillips was the fourth CMO at the supermarkets chain in as many years after he was poached from arch rival Coles.

Details about his departure are scant but some suggested Phillips and senior management had diverging views on the direction of Woolworths marketing and the “Cheap, Cheap” ad campaign which was launched under Phillips tenure – he fired Droga5 and appointed Leo Burnett last year.

About the departure Woolworths said: “We are undertaking a strategic review of our marketing functions and our brand direction as we refocus on getting our customers to put Woolworths first every time they shop.”