Woolworths didn't have permission to use the 'Anzac' in campaign 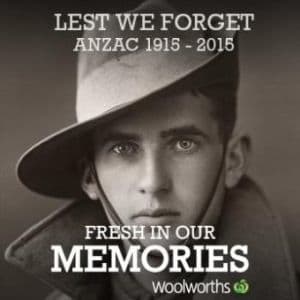 Supermarket chain Woolworths was not accurate given permission to use the word Anzac in its “fresh in our memories” campaign.

The campaign, which received wide-ranging backlash on social media, has now come under fire for not receiving the right permissions for using the word 'Anzac' from the Department of Veteran Affairs.

Woolworths is a partner of the not-for-profit Camp Gallipoli, which is an event run to mark the centenary of Anzac Day by encouraging people to sleep under the stars the night before Anzac Day. The event supports Legacy and the RSL.

“Under the Protection of Word Anzac Act 1920, permission for the use of the word ‘Anzac’ in any such material must be granted by the Australian Government.

“The Australian community quite rightly expects that the word ‘Anzac’ is not trivialised or used inappropriately and as Minister for Veterans’ Affairs, I am responsible for ensuring that any use of the word ‘Anzac’ does not provide commercial benefit to an organisation.

“In this instance, permission was not sought by the campaign proponents, nor would it have been approved.”
Ronaldson explained that as soon as he became aware of the campaign he asked the supermarket giant to remove it, and was pleased that they did.

“While I acknowledge that Woolworths moved quickly to address the situation, I hope this is a reminder to others that the regulations are in place for good reason and that they will be rigorously enforced,” he said.

Woolworths has taken down the site and at the time said: “We regret that our branding on the picture generator has caused offence, this was clearly never our intention. Like many heritage Australian companies, we were marking our respect for ANZAC and our veterans.”

“We continue to be proud supporters of the RSL and Camp Gallipoli in this important year and look forward to working with them into the future.”

The centenary has sparked a raft of events, programming and marketing aligning but have brands and media outlets gone too far with Anzac day? Take our poll here: http://poll.fm/58nj4