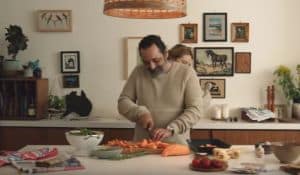 Woolworths has reported worse than expected losses of $1.2 billion in its full-year results for 2016. It also slashed the value of its assets by $4bn.

CEO Brad Banducci, who took on the role in February, has put in a transformation plan to turn around the business, focusing on getting the basics right, delivering on its core offer and preparing for the future through staff initiatives, in-store improvements and a focus on low prices and quality products.

He cited the recently launched 'That's why I pick Woolies' brand platform launched last month by M&C Saatchi and the relaunch of Woolworths Rewards following customer feedback as key to delivering on its improvement strategy. He outlined further enhancements to the rewards programme in the coming year.

Despite the poor financial results, Banducci told analysts and investors that customers are beginning to respond to the supermarket's improving offer with overall customer satisfaction scores improving to 75% in Q4 versus 69% in Q1.

“FY16 was a year of unprecedented change for Woolworths. The decisions we have taken and investments we have made have had a material impact on our FY16 results but have been necessary to begin the rebuilding of Woolworths. Top of my five priorities is getting our customers to put us first and making the right business decisions to enable this to happen. We are regaining competitiveness with improving customer metrics and sales and transaction growth demonstrating our customers are recognising our investment in lower prices, better service, fresh fruit and veg and improved store experience,” he said.

“We expect trading conditions to remain highly competitive in FY17 but are confident that we have a clear plan and set of priorities, and we are encouraged that we finished FY16 with some early signs of momentum”

He says its overhauled own-brand range is “resonating” with customers, and its store renewal programme is having an impact.

The Endeavour Drinks business, which includes BWS and Dan Murphys, is the only business segment not reporting losses with sales up 4.7% year on year.

Yesterday Woolworths requested a trading halt and in the afternoon announced the final plans to exit its failed home improvement business Masters for proceeds of $1.5 billion. After wind-down costs Woolies expects to see net proceeds of around $500m, which represents a significant loss in the joint venture it started with Lowe seven years ago.

Three separate deals have been agreed. Metcash will acquire Home and Timber Group, GA Australia will recover Masters inventory and Home Consortium Group, which owns retailers including Spotlight and Chemist Warehouse, will purchase Masters property. All Masters stores will cease trading by 16 December 2016.

Banducci expects the coming year to remain competitive, but expects progress on its turnaround plan. The supermarket did not offer full year profit guidance.