Winner of AdNews Cover of 2019 revealed 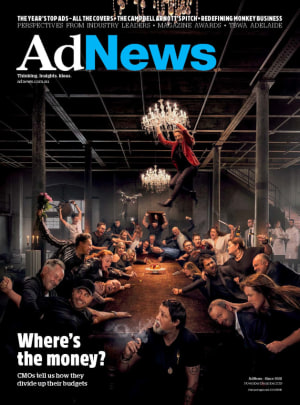 DDB Sydney's cover for The Annual has been crowned the AdNews Cover of 2019 by AdNews' readers.

The Cover of the Year is chosen by the most popular vote among AdNews readers.

Marking its first full year since the initiative launched in May 2018, creating the AdNews cover has become a revered challenge across adland.

In 2019, agencies including TBWA Sydney, LIDA, Ogilvy, Thinkerbell, Host/Havas, Special Group, BCM and DDB, as well as industry collective Youngbloods and artist Mulga were given briefs that challenged their teams, but ultimately showed the abundance of talent in the thriving creative industry.

For the final edition of the year, DDB Sydney was tasked with creating a cover to reflect the issue's investigation into the biggest question on everyone’s lips: Where’s the money?

The team gathered all arms and legs of the industry for a “last supper” style dinner turned battle to get their share of the pie. Everyone from Mike Rebelo and Brent Smart to Tara Ford, David Nobay and Mike Connaghan came together to help deliver a cover to front our biggest edition of the year. Even Sir Martin Sorrell makes an appearance.

DDB Australia chief creative officer Ben Welsh thanked all those that were involved.

“A big thank you to everyone who made this epic cover possible from the team at DDB Sydney to the cast and our brilliant production partners. It’s great to be able to celebrate what makes our industry special – fierce competitors, but still friends," Welsh says.

The winner of the AdNews Cover of 2019 receives a specially made bespoke AdNews ‘A’ trophy and the cover will feature in an exhibition of work at the AdNews Agency of the Year in April.

AdNews would also like to thank all agencies who took the time and made the effort to take part in the new cover initiative.