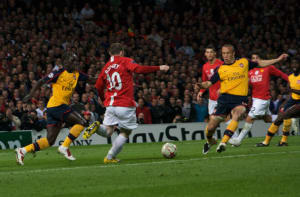 One in five English Premier League (EPL) viewers may be primed and ready to switch internet providers, which could benefit Optus when it announces what it is planning to do with the EPL rights.

Research done by Roy Morgan found that out of the 1.67 million EPL viewers, 77% have fixed broadband in their homes and some 20% of them are very or fairly likely to switch internet provider in the next 12 months.

Optus won the broadcast rights to the EPL in November last year, and it has yet to reveal what it is planning to do with them.

It has been speculated that it could show the games via a direct-to-consumer subscription streaming service, allowing fans to watch their favourite teams live and on catch-up via PCs or specifically made apps for mobiles, tablets and streaming devices, with discounts to Optus customers.

Roy Morgan also found that EPL viewers are more likely than other fixed broadband customers to stream TV, movies or video via computer during an average four weeks: 44% compared with 38% of all people with a fixed-line internet connection at home.

Those numbers get even higher when looking at mobile devices, with 37% of mobile-owning EPL viewers streaming TV, video or movie content via their mobile phones, which is well above the average of 23%. 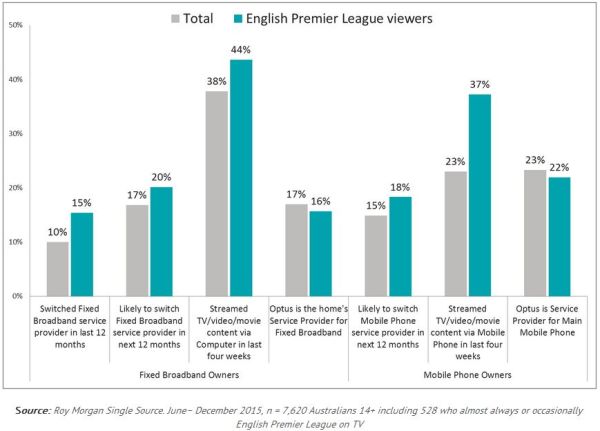 Levine explained that nearly five million Australians think that all telecommunications companies are the same. Noting that this widely held attitude reflects that - regardless of things like price, network coverage, data allowances, customer service and bundling options - the fundamental services telcos provide are viewed as basically the same, no matter which provider a customer is signed up with.

“We don’t love internet connections and 4G networks - we love the content it delivers,” she says.

“Optus now owns something that many Australians want, and will need to be intelligent about providing it in a way that feeds new customers, and revenue, back to its core services for the long term. The success of this Australian-first model depends on month-by-month, consumer-focused impact analysis in the lead up to and throughout the next season, and then beyond over the life of the three-year deal,” Levine added.