Why the Liberal Party bushfire commercial is such a bad ad 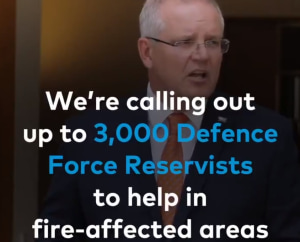 The Liberal Party has used prime minister Scott Morrison's response to Australia’s bushfire crisis to seek political advantage, and try to bandage a bruised reputation, in a video commercial launched on social media with "elevator music".

The 50-second ad featuring Morrison, who already faces criticism for going on a family holiday to Hawaii during the bushfires, has been condemned by advertising commentators and media analysts.

More than 20 people have died and hundreds of homes have been lost as bushfires take hold across Australia, fanned by soaring temperatures and strong winds in a country sucked dry from drought. The coalition government also faces criticism for perceived weak climate change policy.

Adman and Gruen talent Todd Sampson described the ad: “It’s like being ‘sold to’ at a funeral.”

Barrie Cassidy, former ABC TV Insiders front man and media adviser to the late Labor prime minister Bob Hawke: “That is absolutely obscene. They are advertising their responses to the fires - promoting themselves - at the height of the crisis. Their reputation is paramount apparently.”

Social media exploded, citing the lateness of the government's response to the bushfire crisis, the use of the defence force for a political message and trying to score points from tragedy.

We’re putting more Defence Force boots on the ground, more planes in the sky, more ships to sea, and more trucks to roll in to support the bushfire fighting effort and recovery as part of our co-ordinated response to these terrible #bushfires pic.twitter.com/UiOeYB2jnv

The advertisement, which is recording more than 1.5 million views on twitter, says it was authorised by S. Morrison, Liberal Party, Canberra.

In a later tweet, Morrison says: “It is a legal requirement in Australia to include an authorisation on all video messages used on social media by Australian MPs. The video message simply communicates the Government’s policy decisions and the actions the Government is undertaking to the public.”

Todd Sampson: "Advertising! There is something not right about running political advertising during a devastating National Crisis. It’s like being ‘sold to’ at a funeral. PR Crisis 101: say less and do more.(Btw, the bouncy elevator music is too juxtaposing and really annoying.)"

Michael Klaehn, QUT associate lecturer in Social Media, Advertising and Communication, writing on Facebook: "Ads can be funny, heartbreakingly emotional and anywhere in between. Producing an ad in the middle of a national disaster to promote yourself is absolutely disgusting. How much money was wasted on producing and booking this that could be used better. Mindbogglingly stupid."

“You made an advertisement in the middle of a NATIONAL EMERGENCY!!!!!!!!!!! Are you alright in the head?”

“What an appalling exploitation of a national bushfire crisis.”

“How much did this video cost to make and why did it take you 5 months to take these bushfires seriously?”

“Imagine if the money wasted on this self - promoting ad was actually spent on helping our brave firefighters.”

Independent politician Tony Windsor: “You are a bigger fool than I thought you were Scott....can’t you see the political and personal stupidity in producing an ad like this at a time like this ...just do the work not the propaganda ,the place is alight mate not the time to score points.”

Artist Ben Quilty: “It hit 48.9 degrees in western Sydney today. Make an ad about that.”

Commentator Greg Jericho: “Not even a mongrel dog would come back and lick up this vomit.”

Kevin Rudd, former Labor prime minister: “For God’s sake! On a day we have catastrophic fire conditions, in the midst of a genuine national crisis, Morrison, the marketing guy, does what? He releases a Liberal Party ad! He is no longer fit to hold the high office of prime minister.”

“Hey #ScottyfromMarketing you can move fast when you need a puff piece to boost your image (and solicit donations for the Liberal Party).”

The hashtag #ScottyfromMarketing, a reference to Morrison’s commercial career when he was managing director of Tourism Australia, is trending on Twitter.

The lobby group the Australian Defence Association also took issue with the ad, calling out the use of the defence force in political advertising, the standard of copy in the ad and incorrect capitalisation of defence force. .

“Party-political advertising milking ADF support to civil agencies fighting bushfires is a clear breach of the (reciprocal) non-partisanship convention applying to both the ADF & Ministers/MPs. 2) Also cliche-ridden. 3) Its ‘defence force’, not ‘Defence Force’.”

The response was generally more positive on the Liberal Party’s Facebook page.

“ScoMo is coping flack for not doing anything, people don't look behind the scenes, Fires are a state responsibility not the Federal Government.”

“My goodness - always knockers!!!! We are so grateful for all the help being given. Let’s be a little appreciative. Those poor souls in need may find some relief. There are many ways to help - take advantage and do something worthwhile.”

“The DAF Help should have been call in a lot sooner by our Government. The proof of its to little to late is clear The loss of lives, homes, towns Australians losing everything and most of Australia beautiful country burnt away.”

An earlier version of the ad on Facebook had a donate button to deliver funds to the Liberal Party.

David Speers, the new host of Insiders: "Donate to the Liberal Party, that is, not any of the worthy bushfire relief efforts. A grab for cash as well as political capital. Classy stuff. At least this appeal for donations was quickly taken down."

People yelled that he should be "ashamed of himself" and that he had "left the country to burn". Some refused to shake his hand.

According to two prominent residents, journalist and former National Press Club president Peter Logue and retired diplomat and former journalist Zena Armstrong, who helps run the Cobargo Folk Festival: “The people who stood up to Scott Morrison are saying what a lot of us are feeling.”

Tourism Australia has paused its ad campaign in the UK because of the bushfires.

The three-minute ad, Matesong, launched to coincide with the Queen’s Christmas Day speech, is the first activation of Tourism Australia's recently launched Philausophy platform created in partnership with M&C Saatchi, Digitas and UM.