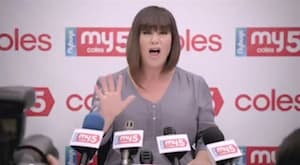 There are precisely two reasons why advertising spend hasn't kept up with retail growth, and those two reasons are Coles and Woolworths.

That's the call from Fusion media analyst Steve Allen, who says the pair have been squeezing the margin of supplier brands to the point where it's affected media spends more broadly.

“It's been going on for a couple of decades, but it's really be brought to light in the past few years with Coles and Woolies,” he told AdNews.

“It's only really in the past four years that they've been going head to head in a big way and, so they've had to reduce margin in order to compete. This means that suppliers, and the brands behind them have been absolutely squeezed.”

Allen suggested that while the Australian Competition and Consumer Commission has been cracking down on the duopoly, it won't be enough to turn around the trend.

“I don't think there's a point where brands will be able to get back that margin. I mean, it's not like they'll be able to say 'because of the ACCC stuff, we want 5% margin back',” Allen said.

“I think Coles and Woolies will tell them to go jump off a bridge.”

However, he thinks while marketers have been focusing on utilising owned media rather than turning to paid for their solutions, this isn't attributable to the margin squeeze.

“I don't think there's a linear relationship there. The approach to digital is them thinking they can do things better, but I don't think it's necessarily a response to margin squeeze,” Allen said.

Meanwhile, Fusion has tipped growth in media spend to reach 3.65% this year, and while the organisation said this figure was “optimistic”, Allen put the growth figure down to a renewed faith in mass market mediums such as TV and print.

“I think digital is continuing to do all the lifting. It really is. It will do double digit growth this year, but I think marketers are going to stop being lemmings and following the digital trend because it's cool to do,” Allen said.

“They're going to start thinking about what gives them reach, and that's TV and newspapers.”