Each year, AdNews partners with Nielsen to take a snapshot of advertising spend trends. This report looks at the 2015 calendar year, and outlines the top ten spending brands in each media channel, as well as the top spending categories. There are some interesting takeouts this year.

Planning and buying advertising is no easy feat these days, thanks to our rapidly changing media landscape and the fragmentation of Australians’ media consumption. In the end, optimising your advertising campaign to hit home with your audience comes down to three key questions: are you reaching the right audience; is your message meaningful to that audience; and did the message inspire them to do something?

Consumers have a multitude of options when it comes to content, which means advertisers have myriad ways to reach them. But, as any marketer will attest, it’s not that simple. Not only can consumers flip through channels, they can multi-task on multiple screens and live-tweet their reactions and opinions in the blink of an eye.

With so many opportunities to connect, advertisers have new ways and more choice to achieve deeper engagement across multiple media channels, both traditional and digitally-led.

Despite the hype around challenges in traditional media, calendar year 2015 saw no slowdown in advertisers investing in campaigns to connect and engage with their consumers.

The Australian ad market grew by 2% in 2015 in overall media spending compared to the previous year. This growth occurred despite a stable local economy and a stable ad spend market for many other developed markets around the globe. The combined media activity across all 39 major categories Nielsen measures is estimated at $9.8 billion for the 2015 period.

A review of the top 10 advertising categories, which combined represent over 70% of all main media spending measured in Australia, is a key indicator of how the advertising and media markets are performing. An increase in estimated ad spend year-on-year for six of the top 10 categories in 2015 has laid the foundations for a relatively positive performance for 2016.

There was encouraging growth in the radio, outdoor, cinema and online/digital advertising media platforms, contrasted by falling newspaper and magazine spend. However, the popularity of digital media, particularly mobile, as a platform for news and retail purchasing will prompt media owners to examine a range of media strategies to support their brand communication.

The federal election and the Rio Olympics are likely to contribute to growth in advertising in 2016.

Consumers' time and attention around media will continue to fragment, yet increase. More video viewing on digital platforms for both native digital content and TV-produced content, as well as growth of subscriptionbased video on-demand (SVOD) across all platforms, is changing the way we look at the consumption of traditional media.

The challenge lies in understanding the preferences of your specific consumer and how they navigate their daily lives in order to speak the right language, in the right context. Consumer experiences and advertising impact how they feel about your brand and, importantly, the action they will or won’t take. There are more opportunities than ever before to shape that experience.

Australian online advertising experienced a significant surge in the final quarter of 2015 to reach a total of $6 billion for the year, a 25% increase over calendar year 2014. 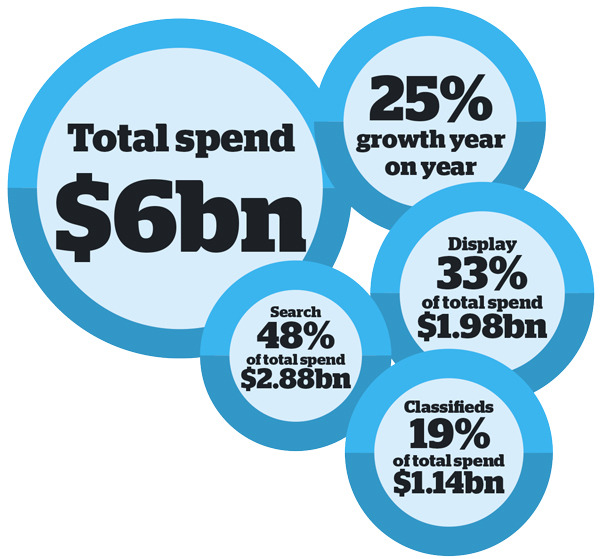 The growth, which was reported in the latest IAB/PWC Online Advertising Expenditure Report, reflects the continued double-digit year-on-year growth of at least 21% since 2010. The data provided by Nielsen does not offer a dollar figure for ad spend in digital.

Digital advertising revenue is traditionally segmented into three main types of ad formats: display, search and classifieds. In 2015, the share of these segments was 33%, 48% and 19%, respectively. Growth in display has been more aggressive, with mobile, video and social all contributing. As with TV revenue, automotive advertisers are the largest digital display spenders.

Mobile advertising increased by 81% in 2015 compared to the prior year and now accounts for one quarter of online ad investment, generating over $1.5 billion in revenue per year.

Digital video advertising opportunities are changing the makeup of digital advertisers. Clients that traditionally spent high amounts on TV advertising have now increased their digital spend to have a true cross-screen approach for their video ads. Most of the growth in digital currently seems to be moving from print rather than from TV. 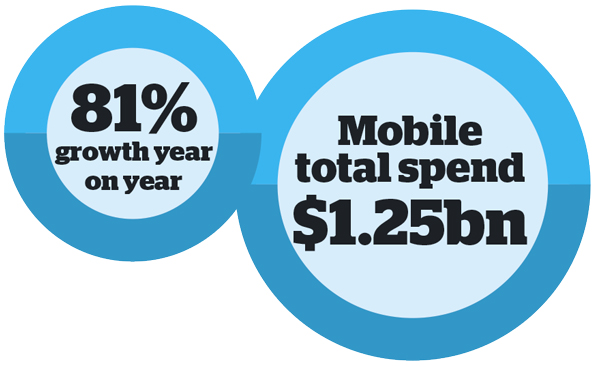 We will also see more inventory being traded programmatically and cross-device targeting options increase in sophistication. Inventory will continue to shift from desktop/laptop impressions to mobile impressions.

This will put pressure on media sellers to evolve their mobile ad offerings and ensure the current difference in price yield between desktop and mobile is diminished. The market has innovated and developed new digital advertisings formats over the years beyond traditional banner ads such as video, native advertising, sponsored content/ads and digital outdoor advertising.

Over half of all online Australians can recall being exposed to at least one of these online advertising formats in a 24-hour period. Sponsored posts in social media have the greatest reach: nearly one quarter (24%) of online Australians recall seeing this type of content, followed by online video advertising. Impact is strongest among Australians aged 16-24 who are more likely than the total online population to have noticed online advertising in the past 24 hours across all of these new ad formats. 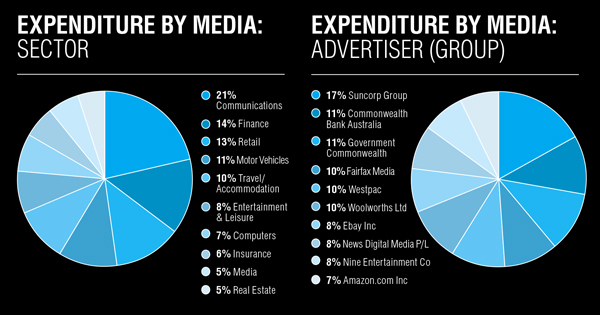 Broadcast or ‘traditional’ TV continues to play an important role for Australian consumers’ discovery of brands and products; 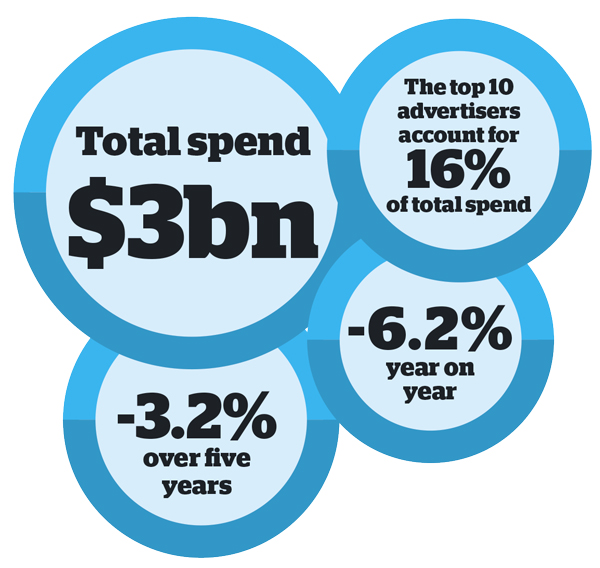 it is also the most trusted media vehicle and the most impactful when it comes to disseminating high quality content.

From global research conducted by Nielsen, traditional TV is the number one media associated with building awareness of new products or services.

Media that delivers large audience reach, as TV does, is particularly relevant for building brand awareness and perception in the long-term. Seven of the 10 metro TV sectors showed decreases year on year.

The retail sector remained the strongest performing sector for metro TV, making up 30% share of the top 10 spenders despite a -6.2% year-on-year decline. The gaming/gambling sector contributed the largest year on year increases with 32% growth in overall spend.

Wesfarmers remained the the top spending advertiser with spend on par with 2014. The big growth plays of the top 10 metro TV advertisers came from Nestlé (+43%), Toyota (+27%) and Commonwealth Government (+25%). 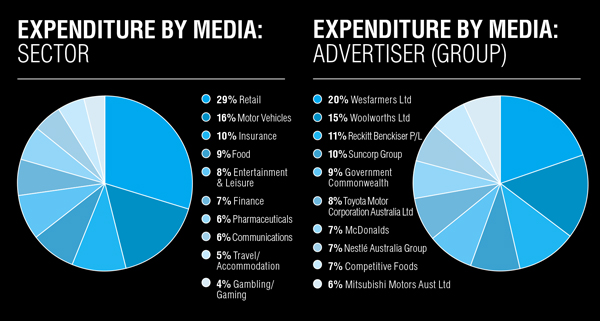 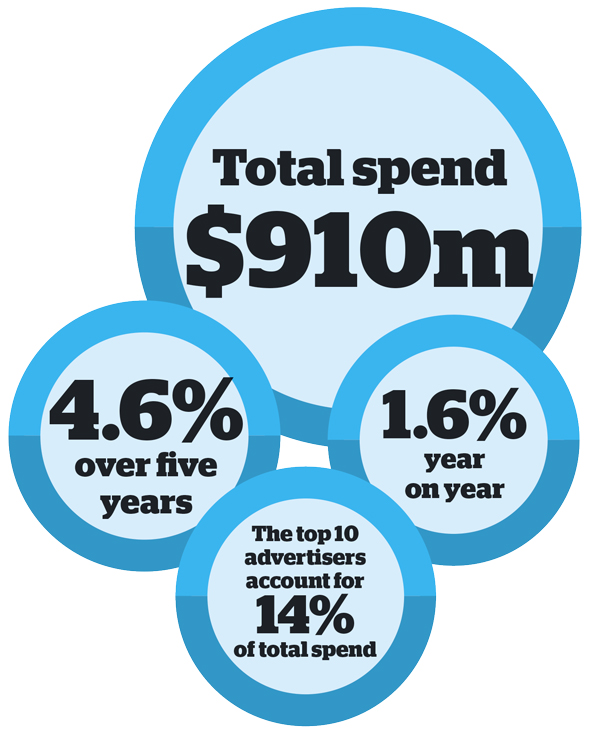 As seen in metro TV, retail remained the strongest performing sector for regional TV, making up an impressive 40% share of the top 10 spenders.

Woolworths slashed its spend by almost a third while McDonald's pulled 16% of its regional spend. 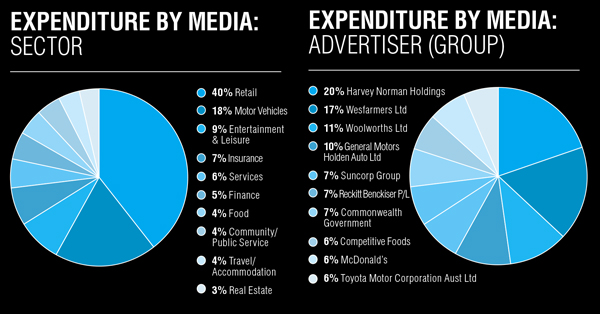 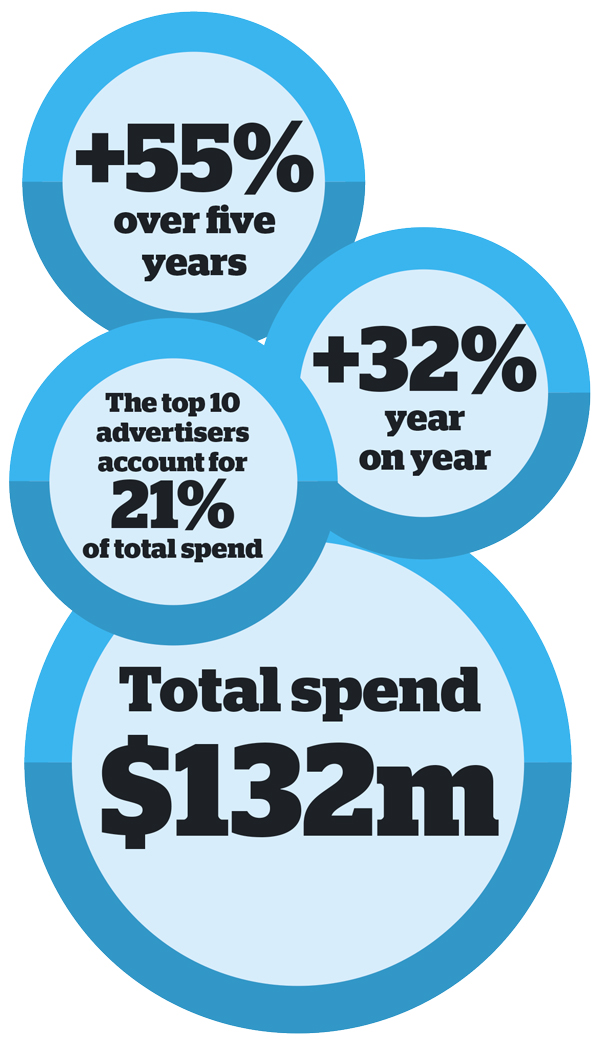 At the top 10 sector level, cinema enjoyed a notable 55% increase in media spending over the past five years. Cinema advertising spend reached $132 million in 2015.

Eight of the 10 sectors increased spend in the category and cinema has seen new categories spending for the first time.

Yum! Restaurants, which owns brands such as KFC, spent close to $4 million last year, having previously not used cinema advertising at all.

As seen with out-of-home advertising, retail has overtaken finance to be the lead sector for cinema, with a 62% increase year-on-year.

Significant increases were also reported for communications which doubled in spend.

The largest growth from advertisers came from Foxtel (+506%), and Qantas (up 148%), which launched its brand campaign in cinema last year. 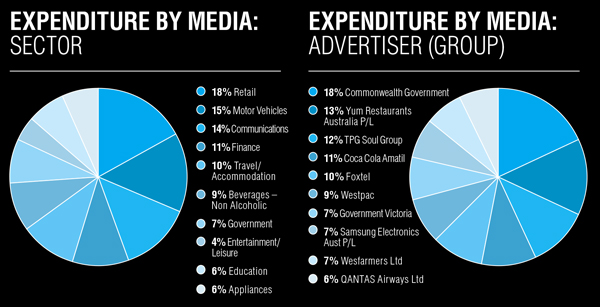 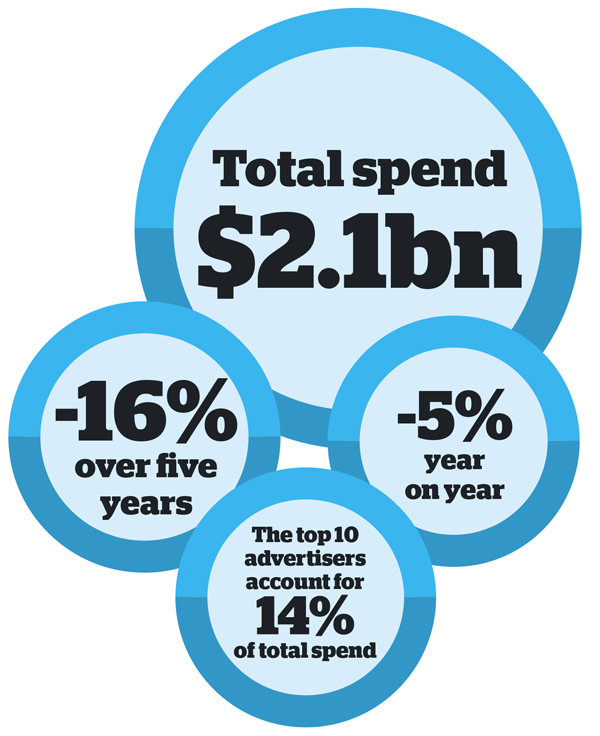 Half of the 10 key metro press sectors showed increases or remained stable year-on-year (YOY). Of the top 10 sectors, spend was 5% down YOY, but real estate positioned itself as the number one sector with an overall increase of 3% in metro press.

Retail continued to invest in various metro press outlets, however, overall spend decreased by -9% compared with the previous year. The biggest decrease in percentage terms was driven by finance (-27%). 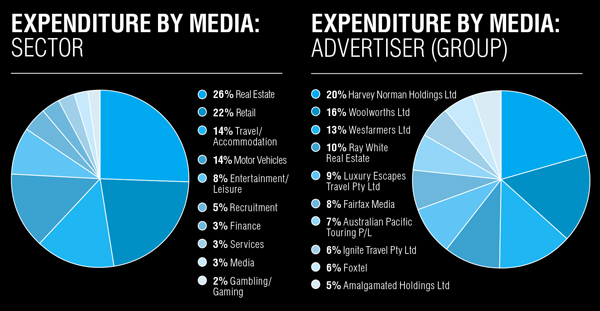 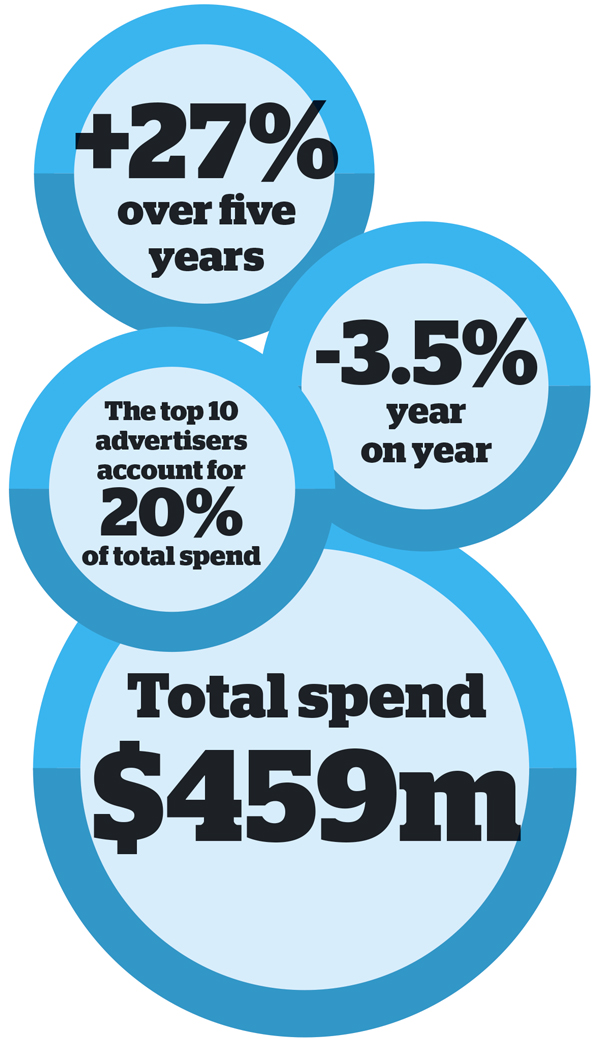 Regional press has seen growth over the last five years, with spend increasing 27% over the period although ad spend in 2015 was down 3.5% year on year (YOY).

The boost came from recruitment advertising and community public service sectors, with increased spending of 21% and 18%, respectively.

Overall, the top 10 sectors reduced spending by 4% YOY. The top 10 advertisers’ list is dominated by retailers and real estate, with McGrath Estate Agents making the biggest increase in spend (+44%).

Woolworths was the biggest spender on regional press and despite Wesfarmers still being the second biggest spender, it slashed its spend by 33% over the course of the year. 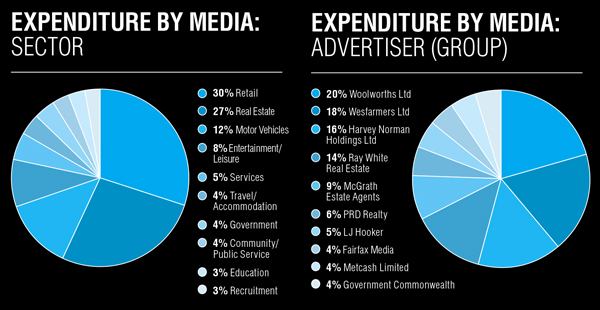 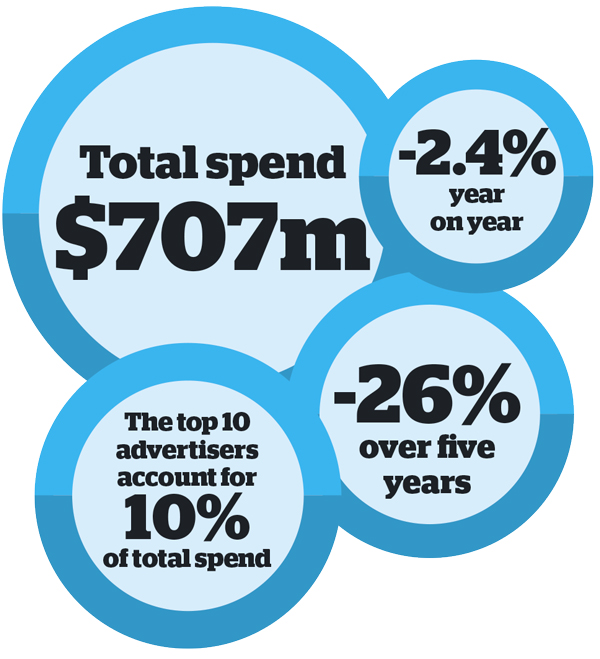 Magazine advertising spend has declined quite substantially over the past five years although the rate has somewhat stabilised in the past two years, down by just -2% in 2015 compared to 2014.

Of the top 10 sectors, retail continues to position itself as the standout performer with more than $154 million in estimated spend, representing approximately 30% share of the top 10 sector spend. Wesfarmers Limited, Harvey Norman Holdings and Unilever Australia contributed to the overall decline in magazine spend, cutting their spend by 41%, 29% and 24%, respectively.

However, notable increases came from the NSW Government, up 37%, and online retailer Century Mail, which upped spend by more than 100%. 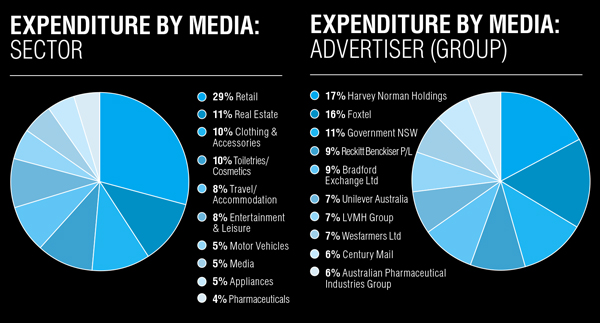 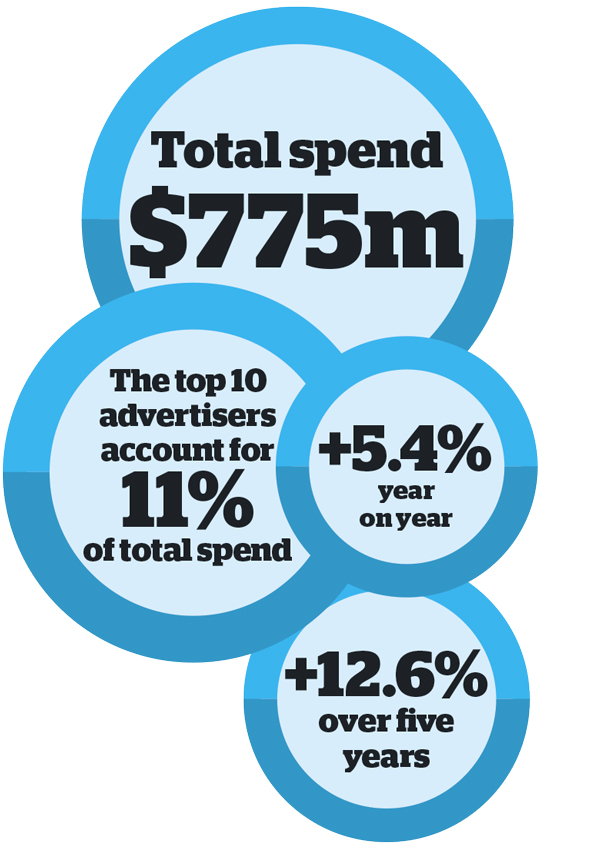 Metro radio has experienced comfortable growth over the past five years, reaching a high of $775 million in 2015. The top 10 sectors across metro radio enjoyed growth of 6% year-on-year (YOY), a healthy sign for the medium.

Retail continues to be the leading sector, reporting 5% growth YOY. 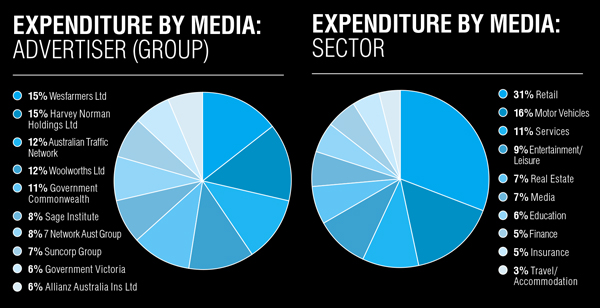 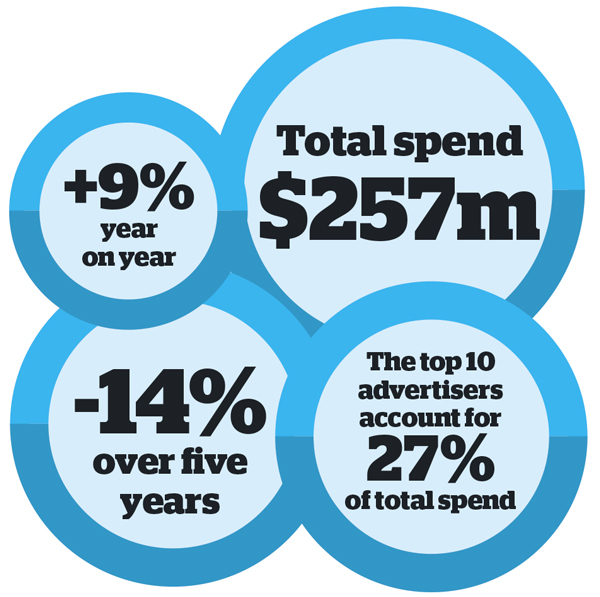 Advertising spend for direct mail increased by 9% in 2015 compared with 2014, a turnaround for a channel that saw major decline in 2012 and 2013. Eight of the 10 direct mail sectors delivered growth. Overall, the top 10 sectors experienced a 13% increase for direct mail, demonstrating that advertisers are still keen to engage their consumers with individualised media campaigns.

Community/public service continued to lead the sector for direct mail in 2015, enjoying a solid 9% increase in 2015 compared with the previous year. Significant increases in spend came from Woolworths and Direct Group. 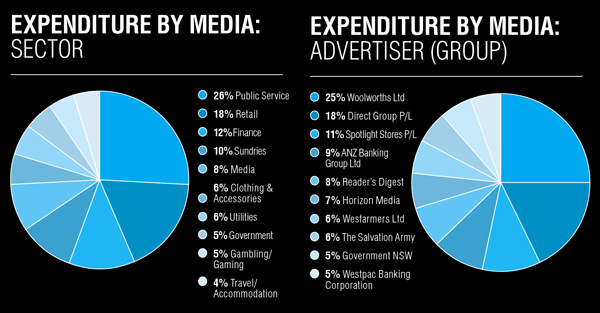 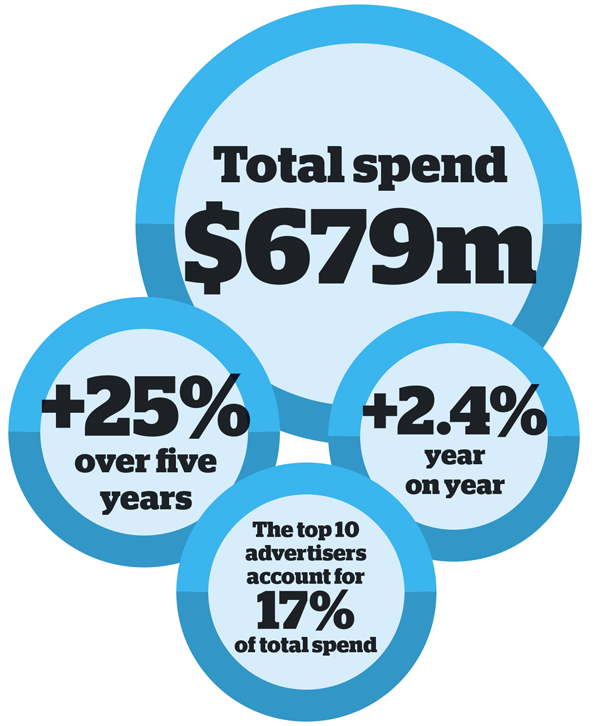 Out-of-home (OOH) experienced advantageous growth in the past five years, reaching a high of $679 million in 2015. Seven out of 10 OOH sectors showed increases in 2015, compared with the previous year, and retail overtook finance to be the lead sector for OOH with a healthy 14% increase in investment.

Non-alcoholic beverages was the standout performing sector with a 37% increase in 2015 to $32 million.

Overall OOH experienced a 25% increase in the past five years, demonstrating that new technology and innovative formats are supporting growth for the medium.

Notable increases in spend came from Samsung, which almost doubled its spend and Optus owner, SingTel, which increased spend by 38%. 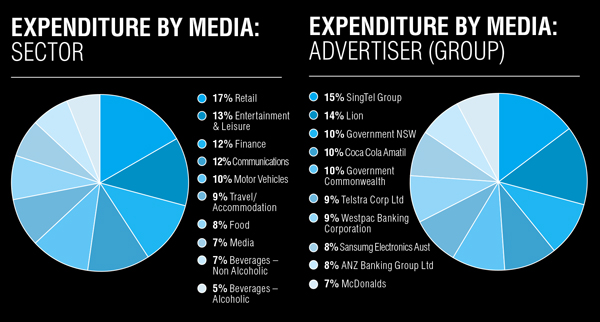