We need to talk about marketing: The Annual 2016 is out now 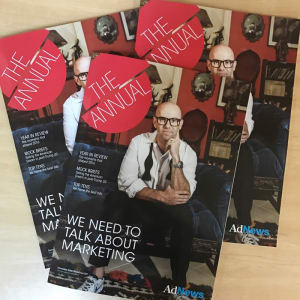 Adam Ballesty on the front cover of The Annual

Our final print issue of 2016 is The Annual. As usual, it's a shiny, glossy end to the year. This issue features the AdNews Photo Essay – a collection of insights and thoughts from 12 of Australia’s top marketers from brands including ANZ Bank, Diageo, Fox Sport and Luxottica. We also feature startups including Pandora, Deliveroo and Mojo Power.

The topics chosen by marketers signal the themes that are going to be big in 2017. These include a swing back to gut instinct and the art of marketing, a backlash against digital and data, a welcoming of big ideas, the power of the Facebook algorithm, marketing qualifications and more.

We also invited creative agencies to take part in Mock Briefs again – rather frighteningly, we predicted the Trump election asking agencies to “sell the American Dream in a Post-Trump world – weeks before the election. (We don't take any blame for the eventual outcome, however.)

Against the Lockout Laws: ‘Enjoy Camomile’ -  The Core Agency

The other brief tackled Sydney's Lockout Laws - either promoting them or running against them, and finally we asked creatives to solve the issue of co-living spaces that are cropping up for adults who are priced out of the housing market. Are giant dorm rooms for millennials the answer? Check out Mock Briefs and see.

We give a run down of the big events of 2016 with our year in review and the Top Tens pick out the ads that we think won the year.

Copies should be landing on desks as we speak – but you can download a digital version of The Annual here.

This is the full list of talent included in the issue:

The agencies that took the time out to play around with Mock Briefs and come up with some spec work are:

You can purchase a digital version of The Annual here, or subscribe so you don't miss out on anything in print in 2017. None of the content from our print editions is available online. So if you don't subscribe – you're missing out.