Marketing intelligence service, Warc, has had to downgrade its predictions of the global expectations of growth in advertising expenditure in 2015.

The latest Consensus Ad Forecast from the business shows that advertising spend will slow to 5.1% globally this year, following an estimated rise of 5.3% last year.

Of the 13 markets covered in the report, 12 are forecast to have net growth in adspend in 2015. This rate of growth has been revised downwards for nine countries since Warc's previous forecast in July 2014.

According to Warc, BRIC countries (countries of Brazil, Russia, India and China) will be the strongest performers, with India, China and Brazil expected to see all-media growth of 11.6%, 10.3% and 7.1% respectively.

The UK is forecast to show the fourth-largest growth rate this year at 5.7%, unchanged from July.

Australia is expected to see a 2.7% growth, which sees it coming in eighth out of the 13 markets covered in the report.

France is predicted to be the only country in which adspend will contract in 2015, down 0.1%.

Its predicted that all media, barring newspapers and magazines, will record year-on-year growth in 2015, with internet seeing the greatest increase, up 16.0%.

James McDonald, research analyst at Warc said: “The global economic outlook is more uncertain than six months ago, with Eurozone stagnation, Russian sanctions and a slowdown in Asia all threatening growth. It is therefore unsurprising that many market-watchers, including us, have revised down expectations.

“Despite the uncertainty, we should still see growth in global advertising expenditure of between 5-6% this year and next.” 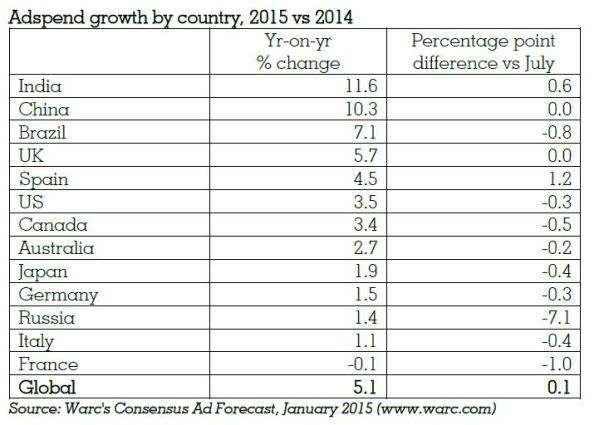