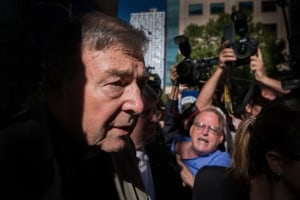 Nikon-Walkley Press Photo of the Year, Running the gauntlet by Jason South from The Age.

Journalists Anthony Dowsley and Patrick Carlyon have won a Gold Walkley Award for their reporting of the Lawyer X Informer Scandal for the Herald Sun in Victoria.

They produced the definitive explanation of a scandal that recast Melbourne’s gangland wars: how lawyer Nicola Gobbo was recruited by Victoria Police to inform on clients.

The story also won Walkley Awards for Investigative Journalism and Coverage of a Major News Event or Issue categories.

The judges: “In its scale, its scope and its ongoing impact, Lawyer X Informer Scandal is an act of journalistic persistence that has changed Australia. That’s what a Gold Walkley is all about.”

The 64th Walkley Awards for Excellence in Journalism were presented in 30 categories.

Chris McGrath from Getty Images was named the Nikon-Walkley Press Photographer of the Year for a body of work spanning Turkey, Syria, Kosovo and Hong Kong.

The senior award for Outstanding Contribution to Journalism went to Sue Spencer, pioneering producer, documentary-maker and mentor who has made it her mission to speak truth to power. Her seven years as executive producer ABC Four Corners was a golden period of investigative journalism, recognised with 14 Walkley Awards, including three Golds.

Chair of the Walkley Judging Board, Lenore Taylor: "At a time when our profession is under threat from upended business models, legislative overreach and those who are very deliberately seeking to de-legitimise our work, it is more important than ever to promote and celebrate the very best of what we do. We all know that a Walkley Award is the measure of Australian journalistic excellence. Congratulations to all this year’s winners.”

HEADLINE, CAPTION OR HOOK
Award Partner Qantas
Baz McAlister, The Courier-Mail, “Time to Haul Ass”, “Give ‘Em a Finch and They’ll Take a Mine” “Halal… Is it Meals You’re Sooking For”