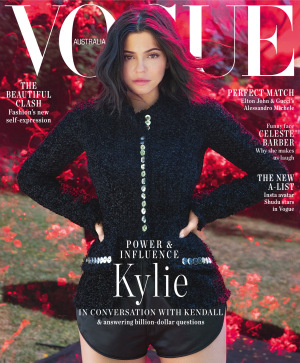 The cover, which featured a make-up free Jenner, sold out in just three days and marked the first time the beauty businesswoman had been on the cover of Vogue globally.

Speaking to AdNews, McCann said Vogue wanted to tap into the fascination surrounding Jenner, with her new baby and burgeoning beauty brand, but also wanted to use her appeal to convert younger readers to Vogue subscribers.

“We put Kylie on the cover because she would appeal to a Gen Z audience and at Vogue we want to continue to appeal to young audiences, as well as keep our older audiences up-to-date with who’s who in that younger demographic,” McCann said.

“In my editor's letter of the next issue I did write that I felt many younger readers would have purchased Vogue for the first time with the September issue and to those that come back in October, I hope that they had a great experience and enjoyed the magazine so much that they will come back and buy us again and perhaps consider becoming Vogue members or subscribers.”

Each advertiser that had an insert running in the September magazine, such as the Sydney Airport which had a booklet inserted, had the option of not being involved in the reprint.

McCann said all of the insert advertisers reinvested in the reprint and the hype around the issue created “enormous advertiser interest".

“It has also opened up some really interesting conversations with clients such as L'Oreal about the combination of working with celebrity and how we can better integrate everything that we are doing with our digital audience and the celebrity’s digital audience, who we can access with our covers and the content we create, to get people to trial new beauty products,” she said.

There was also a Kylie Cosmetics beauty integration for the issue with each magazine, packaged with a Lip Kit valued at $12.99.

Connecting with younger audiences continues to be a focus for Vogue, said McCann, with the October issue also featuring younger talent.

The Australian Magazine Awards will be held next month and represent the very best in the publishing industry. Get your tickets now.