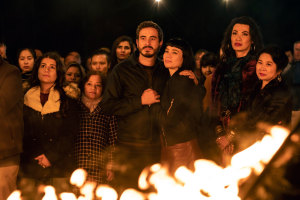 In the last television upfront for 2019, hybrid-funded TV network SBS has revealed its content slate for 2020, highlighting its point of difference compared to the other major commercial networks in Australia.

SBS says while most other free-to-air TV serve up "wall-to-wall reality", it will continue to "keep it real" with local and international content across SBS, SBS On Demand and SBS VICELAND.

The network will look to provide audience with "impactful programming" in 2020 through a list of new shows, including two newly commissioned Australian drama series.

New Gold Mountain is the as-yet untold true story of the Australian gold rush from the perspective of Chinese miners who risked everything for a chance at unlikely wealth in a strange land.

Hungry Ghosts will also premiere in 2020. When a tomb in Vietnam is accidentally opened on the eve of the Hungry Ghost Festival, a vengeful spirit is unleashed, bringing the dead with him. As these spirits wreak havoc across the Vietnamese Australian community in Melbourne, reclaiming lost loves and exacting revenge.

The network will also put the spotlight on immigration, identity, homelessness, addiction and domestic violence with a powerful slate of new Australian commissioned documentaries.

"In 2020, we will continue to lead the way in helping all Australians better understand the benefits and opportunities of a more inclusive society through our boldest and most original offering yet – world class content along with vital services that go the core of what we stand for as an organisation, and who we are as a nation today.”

The network says these partnerships represent the beginning of an "exciting new era for sport" on SBS.

The deal, which AdNews has previously revealed was taking place in May, will see SBS broadcast two live, regular-season NBA games per week in HD on its SBS Viceland channel and on its streaming platform SBS On Demand.

NBA games will also be available on-demand on SBS On Demand and additional NBA content will be featured on SBS’s sport website, beginning with the 2019-20 NBA season.

As well as the basketballs, both the US Open Finals and the Roland-Garos French Open Finals will return to SBS in 2020.

Creasey will also return to host the Sydney Gay and Lesbian Mardi Gras with comedian Zoe Coombs Marr, Network 10 Presenter Narelda Jacobs and, for the first time, Australia’s famous drag queen, singer and actor Courtney Act. In a network first, next year’s event will be broadcast live on SBS.

Mastermind will return for a second season with host Jennifer Byrne at the helm and in 2020, SBS will introduce Celebrity Mastermind to the entertainment slate.

“SBS thrives on telling stories that explore complex issues and can have meaningful impact. With permission to be bold, original and genre bending – SBS is a leader in original dramas and documentaries that inform, entertain and, where possible, shift the dial on attitudes," SBS director of TV and online content Marshall Heald says.

"This cuts to the heart of SBS’s 2020 slate – to present stories that confront tough questions without easy answers, and continue to capture the national conversation around issues central to our Charter in creative and innovative ways.”

When it comes to SBS Food's 2020 offering, Luke Nguyen returns to reveal Vietnam’s history and culinary delights via train in Luke Nguyen’s Railway Vietnam. Audiences can re-imagine and recreate traditional dishes from Pan Asian cuisines with Asia Unplated with Diana Chan and learn to Cook like an Italian with Silvia Colloca.

Through a fusion of Indigenous food and connection to country, NITV’s Food offering also "inspires audiences" to embrace the richness of community and Aboriginal knowledge.

The network will welcome back some of its most successful commissioned and acquired documentary titles with new seasons of Marry Me Marry My Family, Every Family Has a Secret, NITV’s Family Rules, Where Are You Really From?, Who Do You Think You Are? and Filthy Rich & Homeless returning in 2020.

Revealed today, medical expert and TV personality Dr Andrew Rochford will swap privilege for homelessness in the third season of Filthy Rich & Homeless, while TV presenter Lisa Wilkinson, broadcasting legend Bert Newton, and country music star Troy Cassar-Daley are among the well-loved faces joining Who Do You Think You Are? in 2020.

For the full list of SBS programming, see below: