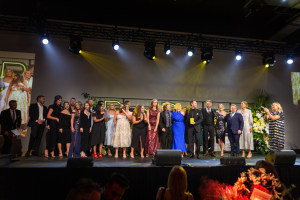 This year’s Big Dream gala, hosted by UnLtd, has raised more than $554,000 for charity.

The third annual event was held last Friday night with more than 650 people across the media, marketing, and creative industries attending.

Yahoo, Accenture Interactive, and Kerry McCabe have also been recognised for their contributions.

Yahoo was inducted into the Hall of Good for its long-standing contributions to UnLtd and Musicians Making A Difference. In addition, Accenture Interactive was awarded a Good Campaign award for its role in launching MOOD Tea and Kerry McCabe was honoured for his transformative work in uniting the industry for good.

“What an absolute honour to receive this recognition,” says Paul Sigaloff, VP at Yahoo AUNZ INSEA.

“Advertising for good is not some airy philosophy, it’s integrated into every facet of our business and it's how we show up at Yahoo every day. And we’re not alone, with Accenture Interactive setting another standard and the ever-inspiring Kerry McCabe’s relentless dedication.

“What an incredible evening, I left with a sense of pride and fire in my belly to do even more next year.”

UnLtd reached a major milestone, with more than $120 million in social impact value being raised by the industry since its inception 15 years ago, $60 million of that was generated in the last two years.

“My nana always said to me that when times get tough you see the truth in people,” says Chris Freel, CEO at UnLtd.

“Well, times have been tough for most of us recently, and what we have witnessed is that our industry has reacted to adversity by helping those in need more than ever. Thank you all.”

This year the industry has helped provide $28.7 million in social impact value and supported 25 charities across Australia, according to UnLtd’s FY21 Impact Report.