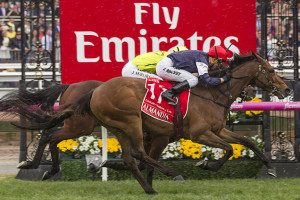 Last year's Melbourne Cup winner Almandin is among the favourites for the race that stops a nation.

Twitter has expanded its coverage of this year's Spring Carnival to stream all of the major races at Flemington.

Last year, Twitter live streamed Seven's coverage of the Melbourne Cup for the first time after striking a deal with the host broadcaster and the Victoria Racing Club (VRC).

This year, the coverage will extend to other major race meets during the Flemington leg of the Spring Carnival. This includes marquee races on Victoria Derby Day, Oaks Day and Stakes Day, which kicks off with the AAMI Victoria Derby at 3.50pm on 4 November and continues with the race that stops the nation at 3pm on Tuesday, 7 November.

Twitter's coverage of the Melbourne Cup will be available globally, while other races are geo-blocked to Australia only.

Twitter will also feature additional premium highlights from the Melbourne Cup Carnival, including the racing action, fashion and celebrities, and a range of behind the scenes action.

Fans will be able to access the live streams at melbournecup.twitter.com, via the free 7live App and 7live.com.au website or on @FlemingtonVRC and @7HorseRacing.

“Live streaming the race that stops a nation was a huge success for us in 2016, with double the number of Tweets on the previous year, and #MelbourneCup trending number one in 12 countries, so we can’t wait to go bigger and better in 2017,” Twitter Australia MD Suzy Nicolette said.

Seven’s network director of sport sales Patrick Moloughney added: “Packaging the thrill of 7Sport’s expert coverage with even greater amplified content of the colour, movement and style that is the Melbourne Cup Carnival has allowed brands to get closer than ever before.”

"By leveraging the power of Twitter's enormous real-time platform for reaction, commentary, analysis, and more, this partnership will again let Twitter users watch Seven Network’s exceptional production and interact with the action on and off the track as it happens,” he added.

The Emirates Melbourne Cup is the world's richest handicap race with a purse of $6.2 million this year.

The expansion of a social media platform to cover the race last year was an exploratory move as the likes of Twitter, Facebook and Amazon increasingly circle around live sports.

Although viewed as a success, streaming delays means that the race would be viewed later on Twitter than it would on broadcast television.

Overcoming this issue will be important for the likes of Twitter as it is conceivable someone watching the race on its platform could view tweets about the winner before the streamed video concludes.