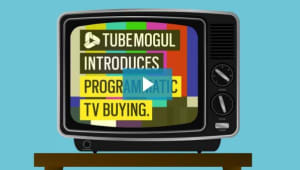 Video advertising company TubeMogul, which last month struck a deal with Foxtel to use its programmatic software to bring the TV network's video advertising operations in-house, has delved deeper into the automated TV world.

The enterprise software company, which went public earlier this year, has just premiered its TubeMogul PTV in the US. In a nutshell, it's a new software solution that enables automated, data-driven buying of TV advertising.

TubeMogul said it brings the accountability and control of programmatic buying to TV for the first time by using a single piece of software. It spans more than 80 cable networks and hundreds of local broadcasters, reaching more than 90% of American households.

More than 10 brands and ad agencies have already signed up for it – including 3M, Allstate, Digitas and Levelwing.

It works by aggregating TV advertising inventory from the major cable and satellite companies, national TV networks and local broadcasters and is made possible by integrations with TV supply side platforms.

While TubeMogul Australia is used by Foxtel in-house, this is in relation to online video and not TV.

In October MCN and AOL-owned Adap.tv announced “the world’s first private programmatic trading market”, combining television and online video, but it is not live yet and will not be offered to advertisers until early in 2015.

TubeMogul says the newly unveiled buying software is the first to enable advertisers to target specific TV networks and dayparts. To inform these targets, TubeMogul incorporates data from Nielsen and others, recommending media mixes that index highly toward specific audiences.

The idea is that as a campaign proceeds, marketers can utilise granular measurement to inform optimisation and strategy. Third-party verification and analytics are built into the software, allowing for deeper analysis of shows, dayparts and regions. Instead of adjusting strategy in weeks or months, the idea is that advertisers can shift spending in real-time based on their goals.

The Australian programmatic TV race is on

While this sounds great for the US, what exactly does this mean for Australia? Speaking today to AdNews, TubeMogul's Sydney MD Sam Smith saId that programmatic TV will most definitely arrive in Australia next year, but it won't be as disruptive as in the US.

Why? Because the Australian TV advertising market and TV broadcasters are sophisticated and have unique trading models, Smith said.

“TubeMogul will aim to launch its Australian programmatic TV (PTV) ad media buying offering next year. We are in talks with broadcasters and media buyers to achieve this. The level of interest is significant and Australia will be at the forefront of PTV,” Smith said.

“We have to satisfy the TV buyers and also prove our value to the TV networks in order to make PTV work.”

He said now that the platform has launched and is driving value to both broadcasters and traders in the US, the attention now turns to Australia. The move requires better data to improve the quality of the data being provided to advertisers, especially data for the second-tier channels. Adding new higher quality inventory to video trading.

“This market has many nuances that we need to respectfully engage,” Smith said.
“Both broadcasters and their traders have extremely different wants and needs and we need to customise the technology to cater to that.”

Smith revealed to AdNews that in Australia TubeMogul has had conversations with Australian audience measurement research firm OzTAM - which collects and markets television ratings data.

“Its involvement will be crucial for the development of creating a programmatic TV solution in Australia,” he added.

“However, because the independent trading tool has already been built, the customisation and on-boarding shouldn’t be as cumbersome as building this from scratch. Our global and local TV product team will be following up with TV executives, agencies and data providers in the coming weeks to really nail the Australian solution.”

An earlier version of this story incorrectly asserted OzTAM was working with TubeMogul, but to clarify, OzTAM’s dialogue with Tube Mogul solely relates to Tube Mogul’s expressed interest in becoming a Gold Standard-certified third party supplier of software to process television audience data for OzTAM data subscriber use.

Smith said programmatic TV technology platforms should improve the way that brands reach audiences, but, unlike the US, the local Australian solution won’t be as disruptive – at least in the interim.

Mitch Waters, the MD of AOL-owned Adap.tv, which has been running a programmatic linear TV marketplace in the US, said it's great to see more technology focusing on programmatic TV as it reinforces the company’s vision of where the market is going.

“With more people out in market discussing the opportunity we hope it will help drive further adoption of this type of TV trading,” he said.

“Its a great story for programmatic, it reaffirms what we have believed in the digital space for a long time. Having tools to automate and the ability to buy audiences – not just context – ultimately leads to greater efficiencies for both the advertisers and the broadcaster.”

He said said in the US there are multiple cable and satellite companies competing for audience and advertising dollars and that finding available inventory to create a marketplace isn't as challenging. But that Australia, with one cable provider and four broadcasters, is more challenging.

A “huge” amount of education is needed

"TV and online video complement each other; in a perfect world advertisers would use a single platform to plan their video investment across different ‘TV’ and online audiences, channels, occasions and devices,” he said.

"But it will be a huge change to the way TV ads have been bought for the past 20-30 years, which has been a simple, in-advance, packaged model. Introducing tech will bring a new level of granularity and digital complexity that the market will need to get its head around.”

He said programmatic will bring greater accountability to TV ad spend as watching a piece of content that’s connected to the internet gives you explicit targeting capabilities. He said that as accountability for marketing spend increases, bringing that capability to TV will be crucial for advertisers and will change the way TV is bought.

"We can expect to see it pick up on Australian shores in 2016, but this will require a huge amount of market education, along with a willingness from advertisers and broadcasters alike to give this new way of trading a chance,” he added.

“Furthermore, the low penetration of internet-connected TV’s will also impact the ability for growing programmatic TV across traditional screens into online video. While many households have connected TVs, many are yet to actually connect to the internet.”

Also commenting on the hot topic, RadiumOne commercial director Patrick Darcy said anything that creates efficiencies in the buying and selling of media is a good thing for the industry.

He said automation and data-fuelled media buying will help advertisers buy the audiences they want more effectively and media owners to better validate the attributes of their audiences.

“There will of course be winners, losers and teething problems early on. I'd suggest that early adopters will have a distinct advantage over the next two to four years as they will have better access to talent and gain an advantage from optimisation data fed back via machine learning. We commend TubeMogul on their announcement,” Darcy said.

*UPDATE: OzTAM CEO Doug Peiffer, added that TubeMogul approached OzTAM expressing interest to be a third party supplier of software to process OzTAM television data. He said OzTAM's relationship with TubeMogul does not extend beyond its requirements to certify the proposed software for availability to OzTAM data subscribers.

“By way of context: Australia has an open and competitive marketplace for software products to analyse television audience data. OzTAM itself does not supply nor develop software for use in the marketplace,” Peiffer said.

“Accordingly, many third party software application providers approach OzTAM about the potential use of its television ratings data within their software products by OzTAM data subscribers.”

Peiffer added that OzTAM has a standard procedure in place to certify software providers to be accredited to process television audience data for OzTAM data subscriber use.

“It is solely on that basis that OzTAM and TubeMogul have been in dialogue,” he added.