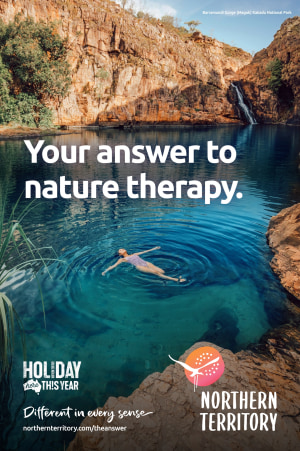 Tourism Northern Territory has launched a national marketing campaign, The Territory is the Answer, following the announcement of borders re-opening from July 17.

The campaign, launched this week, uses current consumer sentiment and uncertainties Australians are experiencing around holiday planning to capture their imagination and inspire a Northern Territory escape.

The series of TV ads are designed to attract Australian travellers looking for incredible experiences in their own backyard by highlighting the Territory’s iconic, bucket-list experiences that many Australians have been dreaming of over the past few months.

The Territory is the Answer national campaign, spearheaded by TV advertising, runs until October.

“Never before has international travel been off the table for Australian travellers and this is an opportunity for people who usually seek overseas experiences to now consider local destinations they have previously put off until ‘one day’ in the future. That ‘one day’ is now.

“The Territory is the Answer campaign is designed to raise awareness of our unique Northern Territory holiday icons in addition to our lesser known gems that are ready and waiting for all Australians, whether they are first-time or repeat travellers.

“It is the first major domestic campaign we are launching since the announcement that borders are opening. The campaign provides the answer to one of the biggest questions in today’s current climate - ‘Where do we go and what can we do now?”

The campaign creative was delivered by KWP! leveraging insights from the current situation and finding humour in things like awkward social distancing in restaurants.

“There’s never been a time, that I can remember, when everyone has been in the same boat like this. We’ve all been through a range of emotions and we’re now ready to smile, laugh and travel again," KWP! executive creative director Corey Swaffer says.

“The creative behind this campaign taps into that sentiment and delivers on the Northern Territory’s promise of being different in every sense. Exactly what we need right now.”