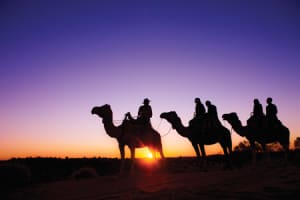 Instagrammers Matt and Mia Glastonbury, along with Matthew Vandeputte, are predominantly renowned for their use of the timelapse technique. The trio are also avid users of Instagram’s hyperlapse app, which allows influencers to accelerate up to 45 minutes of footage to create a sped up effect.

Dubbed ‘Hypermeet,' the campaign is part of a broader strategy to promote Alice Springs as the gateway to the Red Centre, with Matt, Mia and Matthew having kicked off a six-day journey from Alice Springs to Kings Canyon and Uluru on Monday. The trio will complete their trip on March 21.

The campaign is designed to promote NT to the trio's combined Instagram following of more than 175,000 people, and more than 1.3 million Google Plus followers.

Tourism NT chief minister Adam Giles said Hypermeet will bring to life NT for the 41% of Australians who are considering a trip to the region, but are yet to book.

“The Hypermeet campaign is timed to coincide with our Alice Springs campaign, putting renewed focus on marketing the town as the gateway to the Red Centre. Developing this kind of new and industry-leading social media campaign is an important part of our marketing strategy. The endorsement of these influential third party advocates is invaluable.”