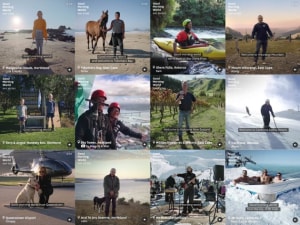 The "people-led" content series, which is part of the 100% Pure Welcome - 100% Pure New Zealand brand platform, was created by Special Group NZ and Special Group Australia and runs for 365 days.

“We’ve actually doubled our pool of Australians who were considering New Zealand as a destination for a holiday,” Reid told AdNews.

“What that means is, around 2.1 million Australians are considering coming to New Zealand on holiday. Now that just blew it out of the water for the target that we set ourselves.”

Reid says within five months, Tourism NZ “smashed” its three-year target to become the highest preference it had been in five years for Australians looking to holiday overseas.

The tourism body has also seen a 1500% increase in social search.

“This is the highest performing campaign we’ve ever done, from both a long-term brand building perspective and a short-term motivation,” Reid says.

The idea for the series was sparked following research from Tourism NZ that found the “Kiwi spirit” was something that underpinned the nation and what it can offer visitors.

“We found that one of the most amazing this people came for the landscapes but what they [have] actually been talking about was the people,” she says.

“For us to be able to bring our real people to life felt really true to who we are as a nation and represented that pure New Zealand brand in a really effective way.”

To ensure they met the content requirements for what Reid says has been a “mammoth production” which is still in progress, a mix of content created by Tourism NZ and Special Group and user-generated content has been used.

“In New Zealand, we’ve got 31 regions so we wanted to make sure that we really covered all of the regions and got a real conception of Kiwis and a real representation of New Zealand as a nation and as people,” she says.

“We got in the local communities and we found people who just reproduced and brought to life the heart of what New Zealand’s about.

“The whole point of this campaign is that everyday Kiwis get to show off their special part of New Zealand and tell the world why it’s so special.”

The eruption, which has a current death toll of 21, hit local and global news in December.

More than half of the 47 people on the island at the time were Australians or permanent citizens.

While Tourism NZ was in the midst of the Good Morning World campaign, Reid says the organisation made the decision to pause all activity at the time.

“We just wanted to make sure we were doing everything we could to support them,” she says.

“What we thought the best thing to do at that time would be to pause all of our activity out of respect to those that had lost their lives and all of the communities affected by the tragedy at that time.”

On the week anniversary of the eruption, Tourism NZ put out a heartfelt message to all of those affected before resuming Good Morning World.

Reid says a key focus for Tourism NZ is to continue promoting the region and help them put together a plan for the road to recovery.

“Our role as destination marketers in this tourism space is to help and support the rehabilitation of the areas,” she says.

In addition to its response to the Whakaari White Island volcanic eruption, Tourism NZ has also launched the Tiaki Promise, focused on keeping the nation’s environment pristine in the wake of climate change.

The environmental initiative encourages all visitors to experience New Zealand in a way that keeps them safe, protects the natural environment, respects all cultures and preserves the country for future generations.

Tiaki means to care for and protect in New Zealand’s native language Te Reo Māori and the Tiaki Promise is an invitation to visitors to care for New Zealand alongside Kiwis.

“By promoting that responsible visitor behaviour, what we’re seeing is Tiaki doesn’t just grow protection and care for New Zealand, it actually fosters and preserves that spectacular scenery that everyone comes to New Zealand for,” she says.

In the future, she predicts that more marketers, brands and countries will lean into initiatives like the Tiaki Promise.

She says they have a responsibility to show care for the destinations they are promoting, and in the competitive tourism industry it will be those who remain unique and distinctive that will stand out.