TikTok is creeping up on Instagram, as hundreds queue to meet its influencers 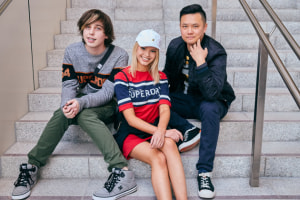 Tiktok is gaining traction among brands for its ability to engage younger audiences, as hundreds queued to meet TikTok influencers, or TikTokers, at Superdry’s latest store opening.

The fashion label opted to use TikTokers because of the app’s popularity among teenagers, particularly from Asian backgrounds.

“It’s incredibly popular among the Asian-Australian community and a vast majority of our audience identify as having an Asian background within Australia and globally. It’s about fishing where the fish are,” Iozzi says.

“We saw a really good opportunity to essentially protect the longevity of the brand by targeting customers that are younger than our traditional customer, therefore providing a brand awareness piece to a consumer demographic that might look to shop with us in a year or two when they have more pocket money.

"In saying this, we selected TikTokers that had a broad appeal across multiple age brackets."

While the ByteDance-owned company isn’t releasing its user numbers, third-party sources estimate it has more than one billion monthly users and 500 million daily users.

“We had 300 people line up just to meet the TikTokers, which is definitely higher than we’ve had for store openings but in saying that we had no expectations,” Iozzi says.

“We had people leave school early. One lady I spoke to had pulled her daughter out of school at 11am so that she could drive three hours to meet the TikTokers at 3.30pm.”

Iozzi expects more brands to invest in TikTok given its rate of adoption, and says the app could be on its way to overtake Instagram's status at the top.

“Social media is an ever-growing and an ever-changing landscape, it’s inevitable there’s going to be a new platform to take Instagram’s crown,” he says.

“TikTok is well and truly on the way to do that, however its success isn’t 100% concrete.”

Superdry also launched its own TikTok account on the day, joining a long list of brands on the platform such as ESPN, along with Pacific’s BeautyCREW and Girlfriend in Australia.

Superdry will use the account for its upcoming store openings and integrate it into its wider marketing strategy.

“It encourages both users and viewers to engage in an honest conversation, rather than just a static image and post. There's a very strong and unique flavour that comes with TikTok in terms of a social platform and we’ll be utilising this as a more organic way of presenting information to our audience.”