Irreverent video-sharing app TikTok is quietly ramping up in Australia 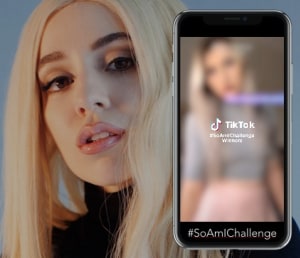 Brands are starting to take note of TikTok's popularity among younger audiences as the video-sharing app builds its content creator community in Australia.

The app, owned by Chinese company ByteDance, has a similar format to stories across Snapchat, Facebook and Instagram.

However, its style resembles the now defunct Vine in that its videos are short, meme-worthy, irreverent and often strange to those not familiar with the platform.

Users open the TikTok app to a feed of 15-second videos, although there’s options for longer clips, that focus on entertainment and comedy, as well as lip-syncing, given the app’s ties with Musical.ly, and dance routines.

Part of the platform’s appeal is that it seems to be truly “community-focused”, something other social media platforms are trying to create.

TikTok does this through “challenges”, where users are encouraged to create the same video under one hashtag, and “duets”, a feature allowing users to create videos with each other. Its algorithm also boosts the most liked clips, incentivising users to create good content. Through these features TikTok users are constantly engaging with each other by either watching trends, contributing to trends or trying to set their own.

Currently, TikTok doesn’t disclose figures on its users but according to SensorTower it was the most downloaded app in the Apple Store, and the third most downloaded app on Google Play for Q1 2019. It has more than 10 offices around the globe, including in Beijing, London, Los Angeles, Moscow and Mumbai.

While it doesn’t have an Australian-based team, although there are talks it’s looking at setting one up soon, representatives from China have been scouting the local market to drive creators to its platform, according to several industry insiders.

“Australia is a key market for TikTok, and we’ll be exploring opportunities to establish a stronger presence in the market as our business continues to grow,” a TikTok spokesperson told AdNews.

The platform has already started rolling out ads, and says it’s developing other “monetisation products” to be released soon. It’s also on the lookout for brands that it can “involve and explore new monetisation models to create more value for brands and creators.”

Publishing house Pacific already sees the value in joining TikTok, with Nicole Bence, its commercial director, previously pointing out the high rate of Chinese and Gen Z consumers on the app.

Christine Petrovski, client partnerships director of fashion and beauty at Pacific, says BeautyCREW and Girlfriend will now join TikTok, creating weekly editorial content and tutorials. It will make client integration opportunities available through options such as native product integration in “how-to” videos, as well as in pre and post-roll ads.

“As part of Pacific’s focus on video and its commitment to connecting and growing younger audiences, Pacific will be the only publisher in Australia leveraging TikTok to connect with Gen Z,” Petrovski says.

Others in the influencing space are also excited to see how TikTok shapes out locally. While they’re educating the market on the app, most believe it still needs a bigger user base in Australia before brands start jumping onboard.

To drive this growth, TikTok has been rolling out campaigns to attract creators, such as its Ava Max #SoAmI challenge, which generate more than two million views, and its #CricketMania in-app challenge ahead of the ICC Cricket World Cup match between Australia and India.

Others have told AdNews TikTok is currently working on rolling out similar campaigns to keep attracting creators.

Influencer agency Born Bred recently released a TikTok talent roster of 20 influencers after working with brands, such as Warner and EMI, to integrate them into the platform. Its marketing and communications director Elizabeth Walker says it needed to highlight creators specific to TikTok at this “embryonic stage”.

“TikTok is a unique platform promoting a different style of content creators which do not necessarily translate their reach or creativity to other platforms such as Instagram and YouTube,” Walker says.

“We have successfully worked with a number of brands in Australia utilising the TikTok platform for campaigns, driving visible results. The obvious verticals are music, fashion and beauty for seamless integration into the platform via creators.”

Walker says it’s important for brands to at least have a presence on the platform and an awareness of its possibilities.

“If you look at the maturity of Douyin (the Chinese version of TikTok), you will see how brands work on a commercial level,” she says.

“So brands in our marketplace need to be ahead of the curve now so they are able to capitalise on the functionalities of TikTok when they are available.”

Walker is confident in TikTok’s strength because it’s a platform where “anybody can go viral”.

“TikTok encourages content creators to be unique and this is part of the attraction for the creators,” Walker says.

“As long as they are able to create the same commercial and monetisation opportunities as platforms like YouTube then they will see exponential growth.”

As well as working with Warner, considered natural brands to the platform because of its focus on music, Born Bred recently hosted an educational workshop with brands such as Disney, Benefit, Boohoo and Fox. Walker says interest in the app is starting to grow but there still needs to be greater education to understand the value of the platform.