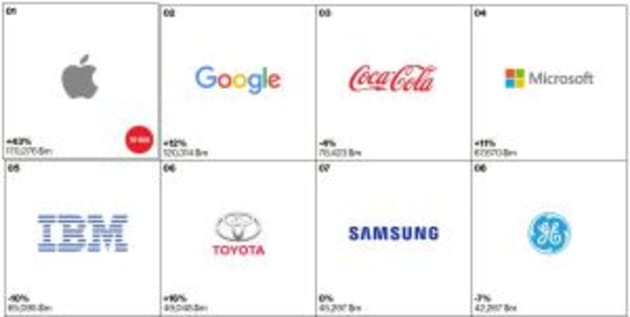 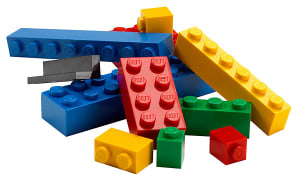 Apple and Google have again nabbed the top spots in Interbrand's annual report of the world's most valuable brands.

Tech players now make up about a third of the consultancy firm's top 100 companies, a marked difference from five years ago when soft drink giant Coke headed the list.

This year, Apple has retained first place – a position it's held since 2013 - with an estimated worth of $170 billion, a huge 43% increase on last last year. Google, in second spot, has had a 12% rise in brand value, with a $120 billion valuation.

Other brands in the top ten include Coca-Cola, Toyota, General Electric, and McDonald's.

Facebook has jumped six places to now be ranked 23rd, with an increase in value to $22 billion, a massive 54% lift. Adobe is also a top riser, jumping nine places to 68th with an estimated value of $6.2 billion, up 17%.

Media companies to make the list include Disney, Thomson Reuters, Discovery and MTV.

Nintendo and Nokia both dropped from the top 100 list for the first time.

Interbrand Japan CEO Yuki Wada is reported to have said Nintendo was snubbed because the "Kyoto-based game-maker is not keeping up with changes in people’s lives," pointing to "its failure to jump on the smartphone game bandwagon in a timely manner.”

EBay has had a small drop, down four places, with a value of $13.9 billion and Paypal jumped onto the list for the first time, at 97th, with a valuation of $4.2 billion.

The list and valuations are compiled using a combination of the brands’ revenue, its importance in a consumer’s life and brand loyalty.

Notable drops include Volkswagen falling four places to 35th, with a 9% loss in value to $12.5 billion (the list was compiled before Volkswagen admitted to fitting millions of vehicles with software capable of cheating diesel emissions tests).

Gucci is down 14%, now valued at $8.8 billion and Kellogg and McDonald's are both down 6%. Hermes, Nissan, 3M, Mastercard and Starbucks have all had big rises over 10%.

Lenovo, Moet & Chandon, Lego and Mini have all made their debut on the list this year.