The Work: How naughty or nice was Myer's bauble? 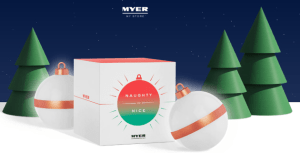 This first appeared in the AdNews March 2019 magazine as part of our monthly The Work feature. Support AdNews by subscribing here.

With a mission to create a campaign that went beyond traditional comms, Myer and Clemenger BBDO Melbourne did just that. We lift the lid on the ‘Naughty or Nice Baubles’ and find out how well the work performed.

Now, results are in and AdNews has the sneak peek.

Created by Clemenger BBDO Melbourne, Myer launched a $20 Christmas bauble in-store which, when connected to a bespoke Myer app and Bluetooth, glows green if you’ve been good and red if you’ve been bad.

Data from the app determining if you (or the kids) have made Santa’s naughty or nice list was then delivered in real-time updates on out of home (OOH) billboards and across social channels.

“We believed that to cut through we needed an idea with interactivity at its core – something that people could play with, respond to and that had multiple evolutions over the Christmas sales period,” Clemenger BBDO Melbourne MD Simon Lamplough tells AdNews.

He said the use of technology helped to give the Myer brand a more contemporary feel and the resulting data gave the brand additional currency and additional campaign longevity.

“The use of tech was an important element,” he said.

“At its heart the campaign reflects a well-understood piece of Christmas mythology – the idea that Santa knows when you’ve been good or bad. But the creation of a tech-enabled bauble helped us to contemporise that mythology.

“It brought Myer into people’s living rooms and gave the Myer brand a central role in a new Christmas ritual.” 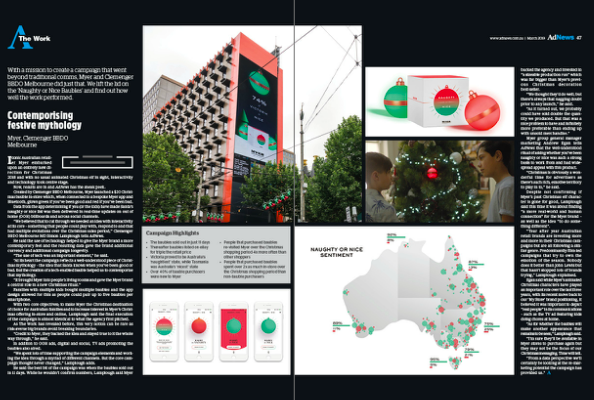 See it first in print

Families with multiple kids bought multiple baubles and the app design allowed for this as people could pair up to five baubles per smartphone.

With two core objectives; to make Myer the Christmas destination of choice for Australian families and to increase interest in Myer’s Christmas offering in-store and online, Lamplough said the final execution of the campaign is almost identical to what the agency first pitched.

As The Work has revealed before, this very notion can be rare as risk-averse big brands avoid breaking boundaries.
“Credit to Myer, they backed the idea and stayed true to it the whole way through,” he said.

“We spent lots of time supporting the campaign elements and working the idea through a myriad of different channels. But the core campaign thought never changed,” Lamplough adds.

He said the best bit of the campaign was when the baubles sold out in 11 days. While he wouldn’t confirm numbers, Lamplough said Myer backed the agency and invested in “a sizeable production run” which was far bigger than Myer’s previous Christmas decoration best-seller. 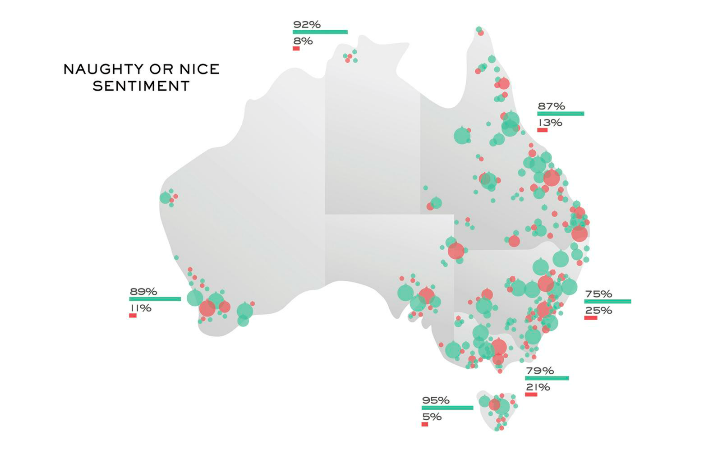 “We thought they’d do well, but there’s always that nagging doubt prior to any launch,” he said.

“As it turned out, we probably could have sold double the quantity we produced. But that was a nice problem to have and infinitely more preferable than ending up with unsold merchandise.”

Myer group general manager marketing Andrew Egan tells AdNews that the well-understood ritual of asking whether you’ve been naughty or nice was such a strong basis to work from and had widespread appeal with this product.

“Christmas is obviously a wonderful time for advertisers as there’s such rich, emotive territory to play in to,” he said.

Despite not confirming if Myer’s past Christmas elf character is gone for good, Lamplough said this time it was about finding “a more real-world and human connection” for the Myer brand – as well as the idea “to do something different”.

“Year after year Australian retail brands are investing more and more in their Christmas campaigns but are all following a similar genre. Predominantly film-led campaigns that try to own the emotion of the season. Nobody does it better than John Lewis but that hasn’t stopped lots of brands trying,” Lamplough explained.

Egan said while Myer’s animated Christmas characters have played an important role over the last three years, with its recent move back to our ‘My Store’ brand positioning, it believed it was important to depict “real people” in its communications – such as the TV ad featuring kids doing chores at home.

“As for whether the baubles will make another appearance that remains to be seen,” Lamplough said.

“I’m sure they’ll be available in Myer stores to purchase again but they may not be the focus of our Christmas messaging. Time will tell.
“From a data perspective we’ll certainly be looking at the re-marketing potential the campaign has provided us.”