The wheels are off as Coke’s festive truck slammed again 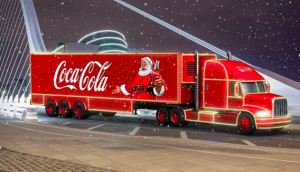 Holidays are coming and so is Coke's famous truck

Coca-Cola has come under increasing pressure to put the brakes on its Christmas truck tour of regional Australian towns. It has been slammed as a"a giant mobile billboard marketing unhealthy products to vulnerable communities."

A consortium of lobbying groups and health bodies claim Coca-Cola should axe its truck tour, claiming it is contributing to health problems and obesity, and it targets children with its marketing by associating itself with Christmas.

The group, which is led by Parents’ Voice, has penned an open letter to Coca-Cola and its charity partner The Salvation Army.

The truck’s planned tour ends in Sydney’s Carols in the Domain, which is a family event.

Parents’ Voice campaigns manager Alice Pryor says: “Parents are angry that despite Coca-Cola stating they don’t market to kids under 12, they are now a major sponsor of Carols in the Domain.”

Since most of the tour around Australia is now complete, the group is asking that Coke rethinks its participation at Carols in the Domain.

“We also appeal to Coca-Cola to cease campaigns which promote unhealthy Coke branded products to Australian kids.”
Tamworth is a particular friction point for the truck’s tour, and the group says that with a population with high levels of obesity, and around 74% of locals overweight, it is irresponsible for Coca-Cola to target the region.

Pryor says: “It’s well-known Coke is a harmful product packed with sugar. With one in four Australian kids overweight or obese, it’s hard to comprehend they’re deliberately targeting children in this at-risk community.

“Coke’s decision to partner with The Salvation Army is not out of the goodness of their corporate hearts, it’s about disguising their marketing techniques. The truck is essentially a giant mobile billboard marketing unhealthy products to vulnerable communities.”

A Coca-Cola spokesperson has defended the initiative saying it is "proud of the good that we are doing working alongside The Salvos in these regional communities – some who are doing it tough."

It has also pointed out that it has only offered Coke No Sugar and its water products during the tour.

A spokesperson says: "We hope that the families and communities that have come to visit one of the Coke Christmas Truck stops have shared in the festive joy that it is intended to spread.

"But we also understand that eating and drinking less sugar is an increasingly important issue for many people. And that is why we’ve taken action to help them drink less sugar – including on this tour.

"For the Coke Christmas Truck Tour, that means that we have only offered Coca-Cola No Sugar and water at each location unless Coke Classic was specifically requested. We also have very strict protocols around not marketing to children and not sampling product to children, except water. The branding of the Coke Truck and the events is also very clearly Coke No Sugar.

"This campaign is all about working with The Salvos through a series of community events that brings people together in the lead up to Christmas, and leaves community facilities such as a refurbished community hall and revamped drop-in services for the Salvos.

"It is also worth noting that the locations we have visited were identified independently of us as communities deserving of a visit in the lead up to Christmas."

The group has also slammed its partnership with The Salvation Army saying that it is not about doing good, but brand positioning for Coke.

Sydney parent, Rachel Clemons, is equally concerned about the impact the truck will have on the communities in question: “It's outrageous that Coke is trying to make their brand synonymous with Christmas. The last thing children need at this special, family-focused time of year is to be manipulated by in-your-face marketing of sugary drinks."

Chief executive officer at the Public Health Association of Australia, Michael Moore, adds: “The truck’s route raises further suspicion about Coke’s motivations. Townsville’s kids are the heaviest in Queensland, with 21.4% overweight and 9.3% obese. There is no justification for Coke’s presence in such a susceptible community grappling with obesity.”