The value in a big idea: If you build it, they will come 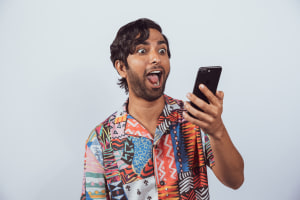 Great ads don't feel like ads, and sometimes the best ads aren't even ads at all. Sometimes they are made by creators across the internet. This is called User Generated Content (UGC).

UGC has quickly become one of the most powerful tools in a marketer's toolkit, helping with everything from brand love to purchasing decisions. It can showcase the scale and variety of consumers that love a brand and create a sense of community and Fear of Missing Out (FOMO) for those watching.

TikTok and its ability for brands to leverage UGC has provided marketers with new ways to not only communicate to audiences, but communicate with them. Beyond likes, comments and shares, brands can now easily start a conversation with consumers via a Branded Hashtag Challenge (HTC) and have them continue it through dynamic, creative video content. A HTC is a unique co-creation opportunity that turns TikTok users into your unofficial brand ambassadors by engaging them authentically and encouraging them to compete in your brands on platform competition.

Think of it as a UGC campaign on steroids.

While the barriers between brands and consumers fall away, the importance of creativity - and the role of creatives - in building these concepts have never been more key.

Brands and agencies are no longer just building content for consumers to watch. Instead, they need to build concepts that are so exciting and engaging that consumers want to add to the story themselves.

There has never been more value in a big idea.

Enabling the big idea.
Creating TVCs used to take huge investments of time and money. However, TikTok is turning that all around, as its intuitive in-app editing tools make it simple, easy and fun, not only for brands to produce content, but also for the audience to execute a brand's big idea.

Once users see an incredible TikTok, they are only one or two taps away from using the sound, the effect, and the storyline to film their own version. Simple features like duet and stitch make it easy to interact with other creators' content.

In this context, the user goes from being a passive consumer to participating as a content creator.

In the traditional model, creating an online swirl that generates UGC also takes time and investment. TikTok disrupts this equation and gets brands interacting and creating with consumers in a fraction of the time.

The ease with which people are creating, repurposing and remixing content on TikTok has meant the relationship between the advertiser and the audience has changed. Their own iteration could drive viral moments and be bigger, or brighter, or even just simply more authentically them.

In fact, with the right value proposition and an engaging "Big idea", the audience will make a brand's ad for them through a HTC.

But the key here is "The Big Idea". Creativity is needed to build that value proposition, and creatives are best placed to do that.

Frucor Suntory, the parent company for V Energy drink, wanted to increase brand awareness and engagement of V energy with both millennials and Gen Z and worked with Clemenger BBDO and TikTok to develop some big creative thinking and launch the #VMakeItHappen campaign on TikTok.

This HTC asked Aussies to get creative in showing how they make things happen in their daily lives ‒ from the big, to the small, the funny and the downright ludicrous ‒ all set to the low-key beats of "Anything U Want" by Indigenous Aussie artist HVWKS.

To kick things off, V and Clemenger BBDO worked with some of Australia's most popular and engaging TikTok creators to co-create authentic, entertaining and at times odd content - the creators featured in the campaign launch included Rifenstine, Shookran, Joeywoodley and Jzandt. Each brought to life #VMakeItHappen in a way that was authentic to their audience. V
Energy then handed over the keys of the challenge to the TikTok community.

A second HTC two months later built on the same theme and added fun effects, including a V Energy branded microphone, to use alongside a lip-sync audio that was all about positive vibes.

The result was more than 40 million hashtag views and a flurry of UGC. The TikTok creator activity was staggered throughout the campaigns to maintain momentum, driving a new wave of UGC submissions. Both challenges delivered an 80%+ ad recall lift and a 3%+ lift in attitude towards V Energy as being a cool brand.

Creativity is the key.
The good campaigns on TikTok have creativity as a core element. One of Australia's leading snack food brands, Arnott's, had creativity baked into its "Flavour You Can See" campaign. Not only did the activity have creators at its centre, but it also creatively reinvented and leveraged nostalgia to drive consumer awareness.

For the launch of its campaign, Arnott's used TikTok to drive engagement with a Gen Z audience and further embed its brand within Australia's youth culture by using TikTok's signature Branded Hashtag Challenge.

The challenge revived an iconic "Flavour You Can See" slogan from a previously retired run of well-known TV commercials, in which the camera would zoom into an Arnott's Shapes cracker to reveal true-to-life flavour. Mimicking this format, and tapping into nostalgia, the HTC centered on the simple call-to-action of zooming into a Shapes cracker and then using TikTok's Green
Screen or Freeze Frame feature to turn the cracker into a backdrop.

Arnott's partnered with TikTok creators such as Alex the Lion, Demi Skinner, Jed Hockin, Sam Fricker and The Rybka Twinwith to interpret the challenge creatively through the lens of their skills and passions - with anything from dancing to springboard diving to soccer ball tricks.

The #FlavourYouCan HTC made a splash by launching a TopView placement to put the challenge front and center when users opened the app. This was supported with Brand Premium In-Feed Ads using the official creator content and driving users to the #FlavourYouCan challenge page.

The TikTok community was then invited to add their creative interpretations of the slogan and compete in the HTC to show off their skills, with the best submission winning a years supply of Shapes.

The #FlavourYouCan campaign paved the way for the Australian snack landscape, with over 25.1 million impressions and 14 million video views. Over 750 original video creations were submitted, of which over 50% used the official music and hashtag, providing a high level of relevancy and brand engagement.