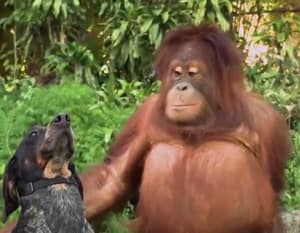 Android could rightly be feeling about as pleased with itself as this dog looks, after new data revealed their ad is the most shared of all time.

An ad featuring cute but unlikely animal friends has scored a major win for Google Android, whose “Friends Furever” campaign has been named the most shared ad of 2015 – and all time.

With the tagline “Be together, not the same”, the ad has now been shared 6.4 million times on Facebook, Twitter and in the blogosphere since its launch in February, according to data from video ad tech company, Unruly.

Demonstrating that cheap and cheerful can reap rich rewards, the ad features a succession of short home-made clips of unlikely and amusing animal pairings and collaborations, such as a sheep and an elephant digging a hole, an orangutan trying to hug a dog, and a monkey climbing a horse.

It joins other spots by Disney, Purina, Roc and Budweiser in the top 5 and beat out its nearest competitor – Disney's “Surprise Shoppers” ad – by a landslide, with almost 50% more shares.

Data was collected from January 1, 2015, to November 16 and is based solely on shares across social media, not on views.

Unruly’s Australia MD Lance Traore said: “We’ve been collecting and analysing consumer data on video consumption and sharing patterns since 2006 and one of the key drivers to video shareability is emotional intensity - how an ad makes a person feel.

“From the joy you feel when your pup welcomes you home to nostalgic memories of your childhood pet, animals can tap into a wide range of emotions that have broad appeal. By placing the focus on friendship and shared experiences, advertisers in 2015 have successfully used dogs, cats and other furry friends to provoke strong feelings of warmth and well-being.”

The Ad Council’s “Love Has No Labels” (6th place, with 2.7 million shares), aimed at promoting diversity and inclusion, is one of eight campaigns supporting good causes to also make it into this year’s top 20.

Unruly Co-CEO and co-founder Sarah Wood said 2015 was a highly emotional year for video ads and advertisers aligning themselves with social causes.

“It’s not that Adland has lost its sense of humour this year; it’s just that it’s found a sense of higher purpose,” she said.

Wood predicted that 2016 will be a year in which advertisers will focus more on exhilarating consumers over provoking emotion.

“With its deluge of superhero, war and zombie flicks - from Batman v Superman to Pride and Prejudice and Zombies - being released in 2016, we can expect marketers to follow Hollywood with similar themes. Going into a quadrennial year of Olympics, European Championships and Presidential elections, the competition for consumer attention will be fierce and consumers will be looking for superhero brands to exhilarate and entertain them in 2016.”