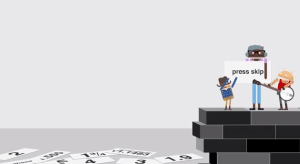 YouTube viewers are obliged to watch your ad for five seconds – but how do you keep them engaged for longer? Google has taken a novel approach to the “pre-roll” ad phenomenon, using reverse psychology to keep viewers watching its latest ad for Android

The “epic pre-roll video” goes for seven and a half minutes and features more than 100 animated characters from the Android universe actively imploring viewers to skip the ad and watch the YouTube video they logged on to watch.

The ad was created by Google Creative Lab in partnership with UK animation house Nomint.

“Google Creative Lab came to us with this wonderful idea of a tongue-in-cheek play on the very nature of the Youtube pre-roll video: a 7-and-a-half minute extravaganza featuring more than 100 animated characters from the Android universe,” Nomint said in a statement.

“In what seems like a never-ending pre-roll ad, the Android characters – instead of trying to make the viewer watch the video, actually seek the most surprising and imaginative ways to convince you skip the video.

“The longer you watch without skipping the more outrageous the video becomes, resulting in a climactic ending."

So far, the ad has received almost half a million YouTube views, not including the views it received as an actual pre-roll advertisement.

It's not the first brand to look at pre-roll ads with renewed vigour. Flight Centre recently launched a spate of pre-roll ads which directly spoke to viewers and asked them not to skip its advertisement.

UK takeaway food retailer Eat used a watch and reward approach, whereby viewers who watched its pre-roll ads through to the end were rewarded with a discount. In his wrap up of SXSW 2015, The Works creative partner Douglas Nicol said using a direct tactic helps to engage viewers in the ad message.

"Eat spend a lot of money on pre-roll advertising on YouTube and what most people do with pre-roll ads is they press skip and don't listen to the message," Nicol said. "They adopted this approach to try and get the brain engaged."